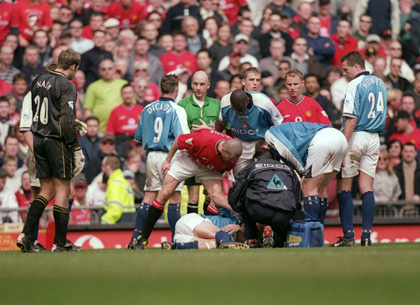 Football is full of bust ups from training ground incidents to heat filled moments during matches and behind the scenes â€“ itâ€™s a manâ€™s game after all. But, while some can leave their anger on the field, there are others that just canâ€™t let it go.
Sometimes these battles go beyond sport and get personal resulting in scarred relationships that will never truly heal. Weâ€™ve come up with a first XI of footballâ€™s most famous enduring arguments, starting with:
Roy Keane and Alf Inge Haaland
Only Keano could spend four years carrying a violent grudge after Haaland insulted him while he lay on the ground injured in 1997. The next time they met Keane practically ended his career with a dish of revenge served with the studs up â€“ or â€œTake that you c*nt,â€ as he put it in his autobiography.

Alex Ferguson and anyone
To coin one of his own quotes, Fergie â€˜could start a fight in an empty roomâ€™. The all-time king of quarrels has fallen out with owners (Coolmore Mafia), chairmen (Martin Edwards), staff (Brian Kidd), managers (Arsene Wenger), players (David Beckham etc.) and pizzas â€“ cross him at your peril.
John Hartson and Eyal Berkovic
The overweight Welshman took offence to a training ground tackle by booting the Israeli square in the head. â€œIf it had been a football, it would have flown into the back of the net,â€ said Berkovic â€“ mistakenly giving Hartson more credit for his shooting skills than he deserves.
Graeme Le Saux and Robbie Fowler
Playground innuendos ensued when a thoughtless Scouser from the streets clashed with ‘the thinking manâ€™s footballer’ as Fowler questioned Le Sauxâ€™s sexuality by offering him his arse during a game between Liverpool and Chelsea in 1998 â€“ weâ€™re not sure if Robbie managed to get his number after all.
Teddy Sheringham and Andy Cole
Manchester Unitedâ€™s â€˜silent partnershipâ€™ up front came about after Sheringham blamed Cole for giving away a Bolton goal in 1998. The two never spoke to each other again during their time at Old Trafford, although it didnâ€™t stop them winning the Treble.
Arsenal and Manchester United
Since their 21-man brawl on the pitch in the early 90s, these games have been no stranger to controversy. Thereâ€™s been Martin Keown swooping on van Nistelrooy after a missed penalty and the Battle of the Buffet a couple of years later â€“ men will be boys
Sam Allardyce and the BBC
Big Sam took exception to a BBC documentary that tried to expose him as a bung hungry manager, ably abetted by his loudmouth agent son. No charges were brought against him but he refuses to speak with the Beeb and conveniently escapes post match questioning when Newcastle lose.
Simon Jordan and Iain Dowie
The perma-tanned chairman rode his high horse all the way to the court room and successfully sued the facially challenged manager when it was agreed that Dowie lied to negotiate his way out of Crystal Palace to be nearer to his family in Bolton â€“Â by taking over Charlton.
Jose Mourinho and Roman Abramovich
The relationship started rosy when the Special One arrived but fell apart three seasons later after successive clashes over directors of football, restricted signings, team tactics and a Ukrainian striker. How do you solve a problem like Mourinho? Money talks, Jose walks.
Ian Wright and Peter Schmeichel
Whatâ€™s with all these warring Arsenal and Man United players? Wrightyâ€™s gripe with the Great Dane dates back to 1996 when he accused the keeper of a racial insult after diving in late â€“ although the two had to put it behind them while sharing awkward screen time as BBC pundits.
Alan Sugar and Terry Venables
When Sugar told Venables he was â€˜firedâ€™ as chief executive at Spurs back in 1993 the pair became locked in a lengthy legal battle. Venables unsuccessfully sued to the tune of around Â£100,000 and then was issued with a legal writ by Sugar for comments made in his autobiography.
Let us know if you can think of any other differences of opinion that have never died down