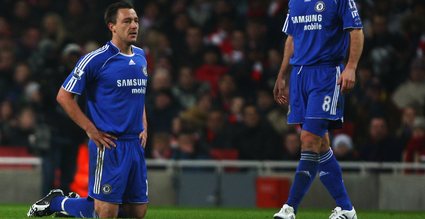 HEROES
Roque Santa Cruz The Paraguayan gets the pity vote. It is not too often you are a hat-trick hero and end up on the losing team.
Sanli Tuncay Another vital goal from the Turkish international for Middlesbrough gave them victory in their must-win game against Derby.
Carlos Tevez Poached the winner against Liverpool to continue a Manchester United-Arsenal title race. Old school!
VILLAINS
Mark Clattenburg The referee put an end to Blackburn’s comeback from 3-0 down against Wigan when he dismissed Brett Emerton for an innocuous second bookable offence.
John Terry Tried his best to split Cesc Fabregas in half while making a simple clearance, but got his comeupance when evil Emmanuel Eboue spotted his ankle dangling in front of him.
Emmanuel Eboue See above. He should have been sent off for the ‘tackle’ on Terry. Once again showed his nasty streak.