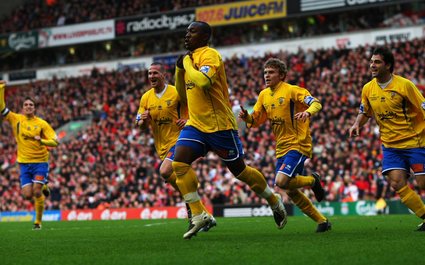 HEROES
Richard Pacquette The Havant & Waterlooville striker became the first school caretaker to open the scoring at Anfield for a while.
Jon Stead Scored Sheffield United’s winning goal against Manchester City in one of the few genuine upsets.
Karl Hawley His brace helped Preston to a 1-4 humiliation of Derby.
VILLAINS
Manchester City fans Their love of all things inflatable came to haunt them. The ball bounced of one of the many balloons they had thrown onto the pitch, bamboozling defender Michael Ball and providing Luton Shelton with Sheffield United’s opener.
Michael Dawson The Spurs man conceded a penalty and was sent-off for a silly handball which handed the tie to Manchester United.
Rafa Benitez Fielded a weakened side against Havant & Waterlooville and, for a time, it looked like he would pay the price for his lack of respect.