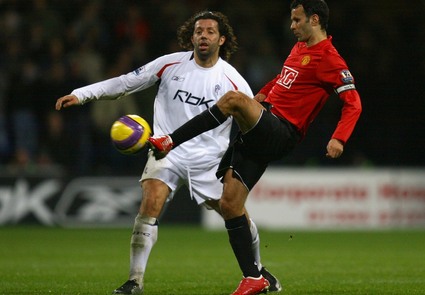 Pies puts out a team of Premier League pension dodgers. Old heads might come in handy in the dressing room, but this lot have a combined age of 392!
Jens Lehmann (Arsenal, aged 38)
The Gunners old timer spends lots of his time sitting on benches and loves nothing better than a good moan.
Alan Stubbs (Derby, aged 36)
Spritely Stubbs left his Goodison Park retirement home in search of a more active lifestyle.
Sami HyypiÃ¤ (Liverpool, aged 34)
Probably due a couple of Hyyp replacements.

Ivan Campo (Bolton, aged 34 on Thursday)
Soon to become Ivan-to Campoutsidethepostofficeonpensionday.
Dietmar Hamman (Manchester City, aged 34)
Truly enjoying his golden years. Didi is in the form of his career.
Tugay (Blackburn, aged 37)
It doesn’t matter how old your legs are if you can pass as well as Tugay.
Claude Makelele (Chelsea, aged 35)
Still the heartbeat, or possibly the pacemaker, of Chelsea’s midfield when called upon.
Gary Speed (Bolton – on loan at Sheffield United, aged 38)
Currently doing a bit of voluntary work in Sheffield to keep his eye in.
Ryan Giggs (Manchester United, aged 34)
On course to become the first Premier League winger to perform with the aid of a walking frame.
Dwight Yorke (Sunderland, aged 36)
Ol’ Dwight made his top-flight English debut back in 1990.
Brian McBride (Fulham, aged 35)
Uncle Brian is still leading the line for the Cottagers. Will soon be able to retire to the USA and regale the grandkids with tales of his service abroad!