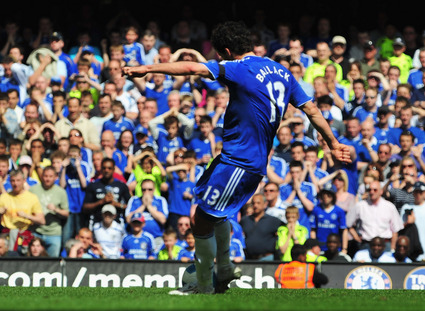 HEROES
Michael Ballack Chelsea’s two-goal hero put the Blues on level-pegging with Manchester United in the title race.
Diomansy Kamara Another two-goal hero. The Fulham bagged his brace as the Cottagers came from two down to defeat Manchester City 2-3.
Stelios Giannakopoulos Secured a vital point for Bolton against Tottenham by converting his side’s only shot on target in the match.
VILLAINS
Rio Ferdinand You know when you’re kicking a wall and you accidentally kick a female steward? No, me neither.
Patrice Evra, Gary Neville, Ji-Sung Park and Paul Scholes/Chelsea stewards It is not yet clear who the real villains are out of this bunch, but there was definitely post-match trouble at t’Bridge.
Michael Ballack/Didier Drogba Moody Mike makes both lists this week. A joint award for their childish squabbling over who should take a free-kick.
(All the Villains from the Chelsea-Man Yoo clash. Are we surprised?!)