England fail to ignite against TnT 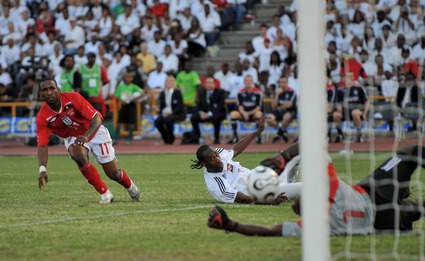 1. That was not worth ten conclusions.
2. Mediocre football on concrete does not make pleasant viewing. It was like playground football. They should have all donned Kickers, taken to goal-hanging and had a game of British Bulldog at half-time.
3. Joe Hart is not ready for international football. He only had two things to do and he messed them both up. Thankfully he did it against T&T in a meaningless friendly and not, oh I don’t know, against Croatia in a European Championship qualifier.

4. With just five days until kick-off, I am now truly bitter that England are not taking part in Euro 2008.
5. David Bentley’s quick, tiny step run-ups to dead balls are mildly irritating.
6. The T&T stadium announcer should be brought in by a Premier League club. Triple announcements of substitutions (even hard of hearing folk in Jamaica knew Ashley Young was coming on) and blasts of music when your team is in possession: what could be better?