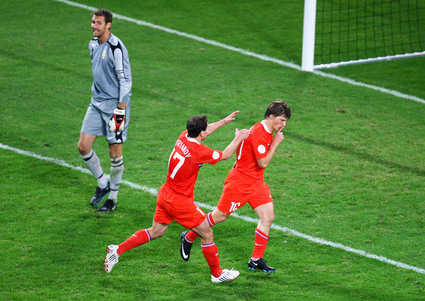 1. What a difference an Arshavin makes. Russia with Andrei onboard looked absolutely irresistible. Sweden couldn’t do anything thwart the Russia attack.
2. Guus Hiddink is a very good manager. This might not be a new conclusion, but it was certainly reiterated last night.
3. The European tradition of the crowd chanting the surname of the goalscorer with the PA announcer does not lend itself to Russia names.

4. David Pleat is a better dietician than he is a co-commentator. Apparently, Johan Elmander is a “heavy player” who is carrying a few too many pounds. Only the other day he was analysing Luis Felipe Scolari’s waistline.
5. The Russian crowd were phenomenal. At least I think they were – it might just have been that the Swedes were ridiculously quiet. But the co-ordinated chanting of the Russians was deafening and very impressive.