Just like after Boxing Day supper, Turkey is down to the bare bones. Here’s the six players they could have done with to help them beat Germany tonight 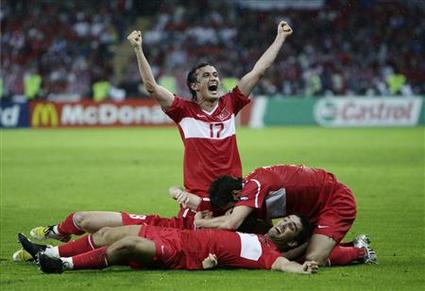 1. Arda Turan
Arda would be in my team of the tournament, but he won’t be in Turkey’s team tonight. Despite being a skilful winger rather than a tough-tackling midfielder, the youngster has acquired the dreaded two yellow cards and will have to watch the semi-final from the stands.
2. Volkan Demirel
The short-fused goalkeeper decided to push Jan Koller to the ground in the final group match against the Czech Republic. Veteran Rustu Recber has been wheeled in from his nursing home to cover, but he didn’t look comfortable against Croatia until the penalty shootout.
3. Nihat Kahveci
I though the Turkish skipper was feigning injury to shirk his penalty responsibilities with the scores still at 0-0 at the end of extra-time against Croatia. But apparently his thigh injury is as genuine as Mark Lawrenson’s belief that he is a comedian. Indeed, Nihat has flown home for an operation (alas, Lawro has not).

4. Sanli Tuncay
The Middlesbrough man is another in the series of Turks least likely to have picked up two yellow cards. And yet the Teeside hardman is sidelined through suspension. His link-up play will be missed.
5. Emre BelÃ¶zoÄŸlu
The departing Newcastle midfielder is ruled out with a hamstring injury forcing him to continue to bring his finely honed benchwarming talents from Tyneside to Basel.
6. Servet Cetin
Even if he wasn’t HUGE, just the sight of Servet would be enough to send most attackers scurrying away from goal. But the bruiser is out with a knee injury (probably the result of bearing the weight of his massive upper body).
More Turk shirkers Emre Asik (suspended), Emre GÃ¼ngÃ¶r (calf), Emre Ofsunshine (made up!), TÃ¼mer Metin (groin)