Some random thoughts on the weekend’s action 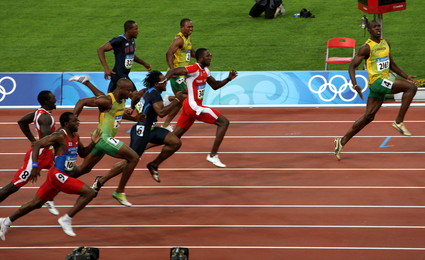 1. How do you expect me to concentrate fully on the Prem when the Olympics are still on? If the opening round of games felt a bit flat, that’s because they had to compete with the Greatest Show on Earth, starring Usain Bolt et al. Speaking of Bolt, he’d make some flying winger, no?
More conclusions after the jump…

2. As I suspected, Spurs’ fine pre-season form added up to… not much. Another sluggish start for the Yids. And sell Berbatov already.
3. Bravo Big Phil – I actually enjoyed watching Chelsea. In terms of completed passes, eight of the top 13 players this weekend were from Scolari’s brave new team. They passed Pompey to death.
4. To Man Utd fans: not so hot without C-Ron, are you?
5. Stoke City are so going to finish bottom of the league.
6. I like the look of Newcastle’s Jonas Gutierrez. Fast, confident, likes to dive. A Geordie cult hero is born. Although let’s see if he’s still got the same pep in January.
7. Ashley Young is going to have a big, big season.
8. “Honest Gaffer of the Weekend” award goes to David Moyes: “Our defending at times was rubbish,” he said after a 3-2 home defeat to Blackburn. Well maybe you should have bought a few players in the summer then Dave.
9. Mike Phelan is the new Carlos Queiroz, ie. the poor sod chosen by Fergie to face the BBC in post-match interviews.
10. Despite my initial misgivings, Lee Dixon is turning out to be a decent pundit. Last night on MotD2, Alan Hansen pretty much repeated everything Dixon said.
What did you take from the opening weekend?