Pies rounds up the weekend action 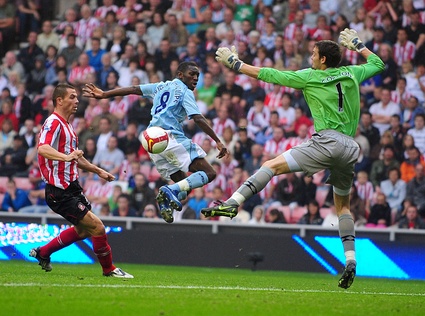 1. Paul Ince must feel like he has been robbed. How did West Ham end up beating Blackburn 4-1? A disallowed goal, a missed penalty, and some good chances, plus conceding twice in injury time led to a very misleading scoreline.
More conclusions after the jump…

2. The biggest and littlest of big-and-little partnerships is starting to take off for Portsmouth. On the subject of which, it was a bit harsh to take Peter Crouch’s goal away from him. Jermain Defoe’s sublime chip might have already crossed the line, but I am not convinced the officials would have awarded the goal with Crouch’s follow-up.
3. Shame on Robin Van Persie for ruining Penalty Miss Saturday. Stewart Downing, Yakubu and Jason Roberts, you are a credit to the Premier League.
4. After their disastrous start to the season so far, Spurs will be absolutely delighted to take a point away from Stamford Bridge. That, combined with the end of the transfer window, might help Juande Ramos to get back on track.
5. Newcastle had better get their act together and be working on getting some players through the door today because they are in danger of letting a good start turn into the usual farce.
6. On a similar theme, Joey Barton should not have been on a football pitch. Even putting aside the arguments about whether he should have been sacked, that was not a player in the right frame of mind to be making a comeback. I suspect we have not seen the last of Barton in trouble.
7. Stoke were desperately unlucky. They deserved a point from their game with Middlesbrough after fighting back to 1-1 with 10 men, but things don’t always go your way in the Premier League.
8. Shaun Wright Phillips is back to being one of the biggest fish in a smaller pond and doing what he does best. He must be wishing he had never left Man City.
9. Aston Villa v Liverpool was the dullest game of the season (I hope – don’t want to sit through too many that are worse than that!).
10. Hull had better develop a Premier League sense of bouncebackability because 0-5 defeats at home to Wigan are not good for morale.