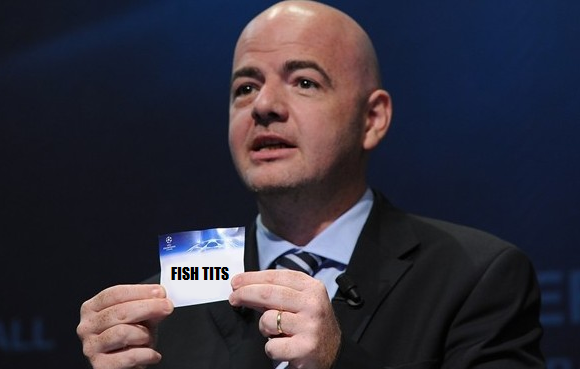 With UEFA’s human Fabergé egg, Gigi Infantino, at the helm, the all-singing, all-dancing, all time-wasting-mindless-small-talking draw for the Champions League group stages has just been completed at the Grimaldi Forum in Monaco.

To wit, the plastic balls of fate fell in the following order…

A familiar whiff to all this, no? Seems like the Champions League groups are pretty much the same every year these days. 17 years in and things are beginning to get a bit stale.

Initial thoughts: It’s probably fair to say that Chelsea have faired best as far as the Premier League contingent is concerned, with Arsenal, Liverpool and City all finding themselves paired with some incredibly big hitters.

That said, it’s not beyond the realms of possibilty that all four manage to squeak through to the knock-outs. Who knows? These Champions League winters do funny things to clubs.

Little side note: Had Malmo been drawn last into Group F, every club therein would have been represented by one Zlatan Ibrahimovic. Sadly, APOEL had to go and ruin “The Group of Zlatan” for everybody!

Any thoughts vis-a-vis the draw, Pies fans? Fancy our English lot to make it through unscathed?