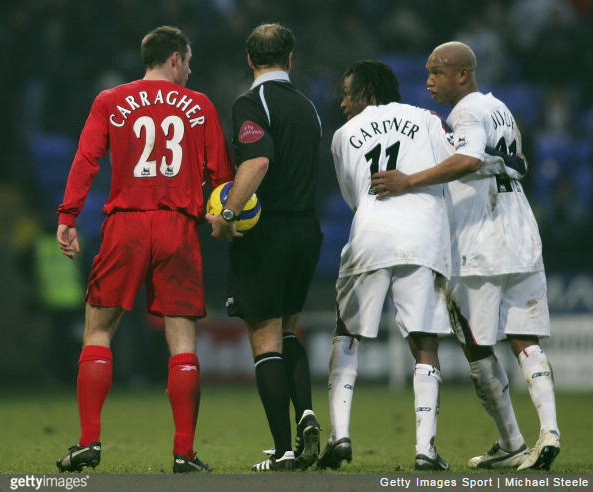 It’s that time of year again, when El-Hadji Diouf comes crawling out of his underground nest to rattle through the list the people he still hates.

Unsurprisingly, perennial foes Steven Gerrard and Jamie Carragher feature once again, though ex-Celtic boss Neil Lennon is a new addition – and a “dickhead”, according to our central protagonist.

Speaking in an interview with So Foot magazine, Diouf was asked about his run-ins with Lennon during the former’s time at Rangers.

I didn’t know Neil Lennon but saw his face and have always hated him.

He was at Celtic and I was at Rangers and the two clubs were at war with each other.

He is a dickhead and I’ve never liked him.

At the end of the Liverpool-Celtic game in the UEFA Cup he asked me for my shirt but I never gave it to him. I would still not give him it today.

Thoughts then inevitably turned to his least favourite pair of former teammates:

Steven Gerrard is a great club player but an egotist as well. But he didn’t care about Liverpool winning – all that mattered for him was getting on the scoresheet.

This coming a month or two after Diouf called Gerrard “jealous”, “selfish” and intimated that it was “common knowledge” the former Liverpool captain “didn’t like black people” during an interview with a Portuguese radio station.

Anyway, the Senegalese whinger saved the final blast for Carragher, whom he simply labelled a ‘big, useless turkey’.

The person I would least want to spend Christmas with is Jamie Carragher. I hate him.

He was the biggest turkey I’ve seen on a pitch. I found him useless.

Diouf has used foodstuffs to diminish Carragher in the past too, once strangely attempting to insult the former Reds defender by quipping: “He is nothing, he is like ketchup or mustard“.

What a strange, insular little world the man lives in.