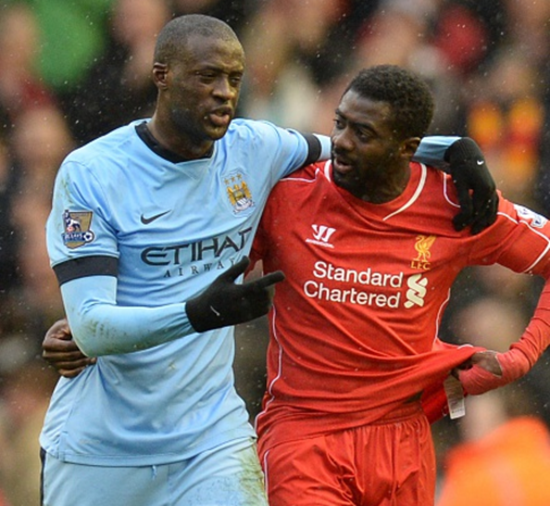 Kolo Toure has said (in a round-about way) that he won’t hesitate to hack brother Yaya to pieces on Sunday if it means getting his hands on the League Cup.

With Liverpool and Manchester City set to contest the Capital One Cup in a couple of day’s time, the elder of the Ivorian siblings has insisted that he is fully prepared to sacrifice his younger sibling for the greater good.

Speaking in a pre-final interview with Football Focus, Kolo was asked if he’d be willing to take out Yaya if the City midfielder found himself clean through on goal at Wembley. His response?

Big time. I’d take him out, because I want to win.

[Yaya] knows me and he knows that if he’s going to score a goal; anything I can do to stop him, I will. He knows that.

The Reds defender echoed the sentiments in a similarly-themed interview with the Liverpool Echo.

There will be no fraternising with Yaya before Sunday – no phone calls, no messages, no feeling.

We are both going to war. We will both want to win and then we will talk after.

Asked if Toure family loyalties are likely to be split while watching match, Kolo replied:

Yaya is closer to some (family members), I am closer to others.

At the end one of us will come out on top.

Older brothers the world over are now silently nodding their heads in agreement. Knocking your l’il bro about a bit under the flimsy pretence of sport is all part of the dividend.

Anyway, it toughens them up in the long run. You’re actually doing them a favour.