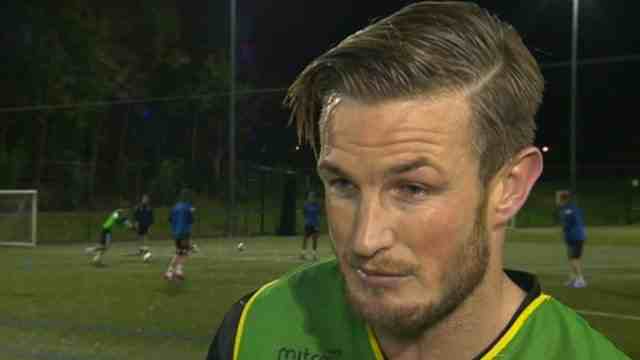 David Beckham… or is it Jamie Gleeson? Or is it someone who looks feck all like David Beckham?

Ah, the magic of the cup and all that blather. The first round of the competition usually throws up a whole load of heart-warming stories of heroic one-eyed fireman or goalkeeping vicars lining out for their local non-league club. However, courtesy of Dorchester Town’s Jamie Gleeson, we have a rather fab little tale.

You see, Jamie is a part-time David Beckham lookalike. Now whether or not that means he’s done any serious media work or simply opened a Lidl in Swanage, I don’t really know.  Anyway, the 27-year-old midfielder is set to line out for the Blue Square Bet South side against the might of Plymouth Argyle at the Avenue Stadium on Sunday. Gleeson explains…

“I started off at Southampton but it didn’t really work out.”

“I do a bit of care for a bloke in a wheelchair. I’m a David Beckham impersonator also while a lot of the boys say I look like Rylan from X Factor. I don’t really see it.”

I don’t actually know who Rylan from X-Factor is either. And isn’t he being a bit vague about his care work? He sounds shifty to me.

Anyway, good luck to the chap. I can’t help imaging what it would be like if the real Golden Balls ever lined out against his less high-profile Becks-a-like. Probably not much different than any other game, to be honest.