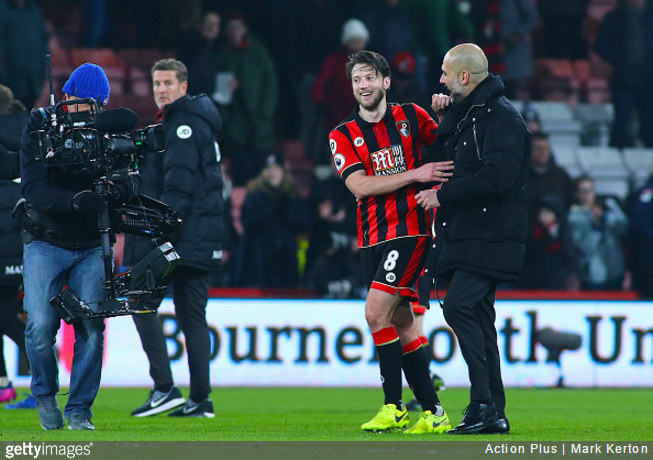 While there is a tendency to cast Pep Guardiola as some sort of cold, awkward, unfeeling, possession-obsessed android, the Man City manager certainly managed to pass himself off as human in the wake of his side’s 2-0 win over Bournemouth on Monday night.

After the final whistle, Guardiola made his way over to Harry Arter in order to deliver a personal message of congratulation to the Cherries midfielder…

From Pep to @HarryArter2, a touch of class…

“He gave me and my partner his best wishes ahead of the birth of our child.”#afcb 🍒 pic.twitter.com/BEu0MaRbBK

Speaking to the Bournemouth Echo after the match, Arter described his brief but heart-warming interaction with Guardiola:

He offered his best wishes for me and my partner this week, which was an unbelievable touch.

He is someone I have a massive amount of respect for. I watched his Barcelona teams – and look at his Manchester City side tonight.

For me, he is the best manager in the world. I don’t think there’s anybody close to him and what he has achieved.

For him to offer that to me, I respected it and accepted it with a smile on my face.

As you’re probably aware, Arter and his partner Rachel lost their first baby when their daughter was stillborn in 2015.

Rachel is now pregnant again and due to give birth later this week.