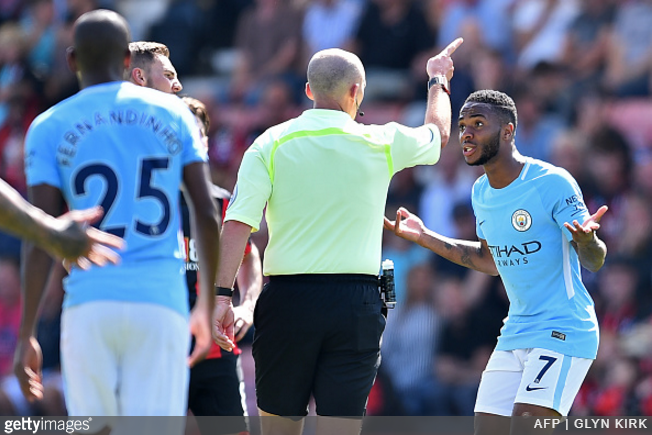 Mike Dean once again ensured he was centre stage as Man City’s dramatic 2-1 win over Bournemouth ended in scenes of utter pandemonium.

Having gone behind to an early Charlie Daniels half-volley screamer, City clawed themselves back level minutes later through Gabriel Jesus.

The match seemed destined to finish 1-1 when the board went up to inform everybody present that an extra five minutes of injury time had been tacked onto the second half.

Therein, a bit of faffing between the managers and a dash of injury feigning saw an extra two minutes lumped on top of that – which is exactly the point that Raheem Sterling popped up in the box to meekly shank a last-second winner over Asmir Begovic’s head…

Sterling made a bee-line to the travelling City fans, a boisterous group of whom spilled past the hi-vis barracade and over onto the pitch to celebrate with their boys.

Dean then waltzed over in his inimitable aloof style and administered Sterling with a yellow card for time-wasting, despite the diminutive winger being somewhat trapped amid the ecstatic maelstrom.

Alas, it was Sterling’s second caution of the afternoon and, mere seconds after tasting the highs of plundering a last-gasp victory, he was sent on his way as his teammates continued to remonstrate with stadium security and the officials on duty.

In fairness to Dean, the FIFA rules on over-exuberant goal celebrations read thus:

While it is permissible for a player to demonstrate his joy when a goal has been scored, the celebration must not be excessive.

Jumping into the stands could incite crowd violence or cause injuries and he even barged past stewards to get to the away fans.

Safety is of course paramount, but heaven forbid anybody should actually enjoy themselves or experience any genuine human emotion at a football match.