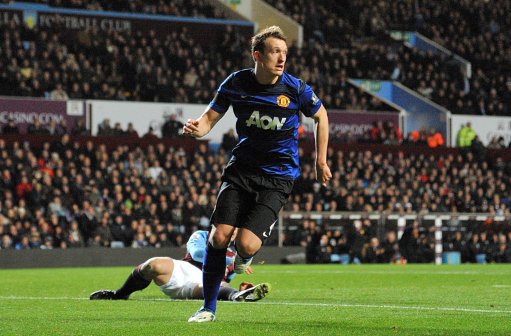 This game was so interminably dull that ESPN commentator Jon Champion had to resort to telling the viewers about which United players were buying which dogs, as sidekick Chris Waddle, a man who sucks any last particle of excitement out of the most exciting occasion, sent us to sleep.

However, overall, Sir Alex Ferguson’s men were in total control, despite the 1-0 scoreline, with Alex McLeish stamping his trademark lack of entertainment all over a dismal Villa side. A midfield of Bannan, Herd and Jenas summed up the lack of class and creativity in a Villa side who went 1-0 down after 20 minutes courtesy of Phil Jones,  who was deployed in a midfield role for most of the game. Nani was the provider, sending over a cross which Villa’s defence woefully failed to deal with, leaving 19-year-old Jones to stroke the ball home from close range.

United lost Javier Hernandez to an ankle ligament injury which looks like keeping the Mexican striker out of action for a number of weeks, while Villa themselves lost ‘keeper Shay Given to hamstring trouble

Since the 6-1 mauling by City, United have tightened up at the back, although this new found parsimony has left the Red Devils a less exciting team to watch. However, with yet another 1-0 victory under their belts, Fergie won’t be too worried about that. As for McLeish, the dull performances of his dour Villa side will make it even harder for the Scot to win over the disbelieving Villa Park faithful.