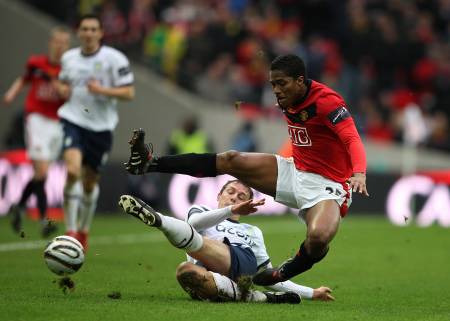 Manchester United just about did enough to deserve their 2-1 victory over Aston Villa in yesterday’s Carling Cup final at Wembley.

Wayne Rooney will undoubtedly steal the headlines again after coming on as a substitute to nod the winning goal but it was the United team’s resolve that won the match for them – not their talisman alone.

After going behind to a James Milner penalty early on, United fired into life and got themselves back into the match almost immediately by means of a classic Michael Owen finish.

Rooney replaced the injured Owen just before half time and duly won the tie for United with a well-placed header, but Villa continued to battle away and kept themselves in the match admirably with a gutsy – but ultimately fruitless – performance.

Kuszczak Had little to do overall but looked perfectly able when called into action, most notably his good save from Milner early on. 6.5

Rafael Looked naive at times. Supported Valencia eagerly but made a few too many needless fouls. Subbed off after an hour due to injury. 6

Vidic Struggled with Agbonlahor’s pace and movement throughout the game, especially when the young forward gravitated out toward the left flank. It was his clumsy foul (for which he should have been dismissed) on Agbonlahor that gave Milner the chance to put Villa ahead from the spot. 5

Evans Again lacked the concentration needed in big games. Responsible for a defensive mix-up with Vidic and Kuszczak late in the first half which could have easily resulted in conceding a soft goal. 5.5

Evra Pretty much a standard display from the French left back. Good enterprising offensive play mixed with competent defensive work. 6.5

Valencia Quiet start that built to an impressive finale. Played much better once Rooney came on. 7

Fletcher OK and nothing more. Usual blend of sharp tackling and short passing. 6.5

Carrick Kept under and over hitting set piece deliveries and didn’t pick a decent pass until the second half, but steadily grew in confidence thereafter. Wasted his first two chances to test Friedel but forced a good save from the Villa keeper with his third. 6

Park Spirited performance from the South Korean. Surged up in support of every United attack and even instigated a few of his own. As hard working as ever but, unfortunately, as flawed too (he seems to lack the confidence to shoot from range, or to go for the killer ball). Replaced late on. 7

Owen A ‘vintage Owen’ strike for his goal but sadly a ‘vintage Owen’ muscle snag shortly after. Looked lively until his plasticine hamstrings gave up on him again, forcing him off after just 40 minutes. 6.5

Berbatov Lovely hold-up and link play coupled with a bit of defensive grafting. Deserved a goal to cap off a fine performance, but unfortunately skied his only clear chance to score. 7.5 MAN OF THE MATCH

Rooney Came on for Owen shortly before half time and added some inevitable bluster to United’s attack. Struggled to get a proper foothold in the game until his looping header put United back in front, and then went close with an even better header but saw his effort come back off the upright. Trying to ignore the nauseating hyperbole of the commentators and pundits isn’t easy, but Rooney’s performance – and his goal – were good but not great. 7

Neville Came on for the injured Rafael after an hour and did exactly what you’d expect him to. Shored up the United defence without fanfare. 6

Gibson Entered the fray as a late substitute for Park, and went on a lung-bursting charge from his own box to the Villa byline to alleviate pressure. However, he wasn’t on long enough to be given a fair rating. N/A

Friedel Could do nothing about the two goals he conceded. Otherwise, reliable as ever. 6.5

Cuellar Didn’t look comfortable going forward. Not a full back in a month of Sundays. Replaced for the last 10 minutes. 5.5

Collins Looked uneasy on the ball at times, but performed his defensive duties well enough. Made a few decent blocks but I’m still not quite convinced that he’s worth £5 million. 6

Dunne Struggled to deal with Berbatov’s clever flicks. Caught out by the Bulgarian in the build up to United’s first goal and despite recovering well, still saw the loose ball fall to Owen. 5.5

Warnock Decent performance from a potential candidate for the newly vacant England left back spot, but increasingly struggled to cope with Valencia as the game entered it’s final stages. 6.5

Young Saw plenty of the ball but was mostly ineffective from open play. Managed a few dangerous crosses but was quiet for the majority. Marked down for some dubious diving. 5.5

Petrov Played adeptly in the role he’s occupied for Villa for the past few years. Kept things moving through the midfield without doing anything spectacular. 6

Milner Showed nerve to tuck away his early penalty. Ran tirelessly and performed equally well defensively as in attack but again, didn’t play quite as well as the pundits would have you believe. 7

Downing Quiet for long periods but his delivery was good for the most part. Became more and more involved as Villa became increasingly desperate. 6

Agbonlahor Deserved a goal as a reward for his industry. His pace and mobility caused Vidic problems all game long but his final product was left wanting at times. 6.5

Heskey Held up play well but (perhaps predictably) offered little in the way of goal threat. Involved in some decent defensive work as well. 6

Carew Came on for the final 10 minutes as a physical embodiment of Villa’s last throw of the dice. Won a few headers but nothing more. N/A

Alright chaps and chapettes, what do you reckon?  Agree/Disagree?