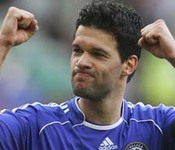 So the FA will be happier than Larry this morning. They got the showpiece final they wanted for the new Wembley. No surprise that Watford couldn’t match Man U’s firepower (although they put up a good fight), but Blackburn really made Chelsea sweat; the Blues won out after extra time, causing Roman Abramovich to fall back in love with Jose Mourinho. So the quadruple/treble is still on. Remarkable, really. Watch highlights of both games after the clickâ€¦