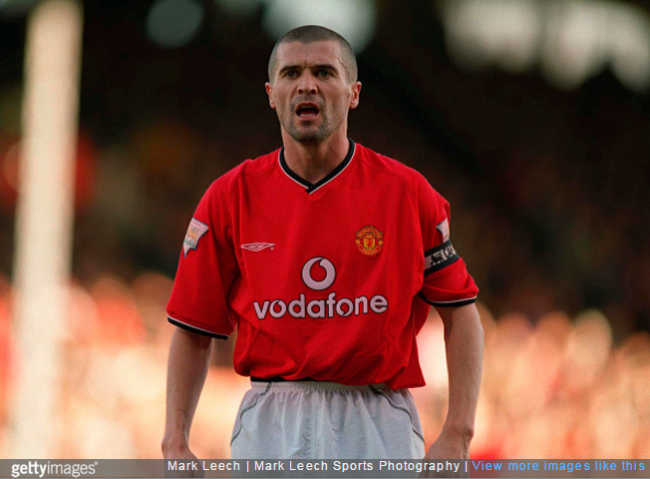 Uncompromising on and off the pitch, Roy Keane has never been a man afraid to voice an opinion.

On the 15th anniversary of his famous “prawn sandwich brigade” rant, here are five other classic examples of Keane giving to someone straight…

1. “Stick it up your bollocks”

Came during a belter of a row with Republic of Ireland manager Mick McCarthy over what Keane insisted to the Irish Times was a lack of preparation for the 2002 World Cup, an interview that included the modern management classic “Fail to prepare, prepare to fail”.

And with that, Keane came storming home from the World Cup and quit international football. Temporarily.

2. “You think you are a superstar”

Rio Ferdinand was just one of seven players singled out for a rollocking when Keane laid into his Manchester United team mates on the club’s official TV channel.

He talked of “a shortage of characters” and said some of the more experienced players “are just not leading”. Of Ferdinand, he said: “Just because you are paid £120,000-a-week and play well for 20 minutes against Tottenham, you think you are a superstar.”

Manager Sir Alex Ferguson insisted the interview was pulled, and the resulting ructions are widely believed to have led to Keane leaving the club he had served with distinction under something of a cloud.

International trips with Keane were never short of drama. In 1991, as a 19-year-old, Keane infuriated Republic of Ireland manager Jack Charlton by turning up half an hour late after a night out following a friendly in Boston, USA.

Charlton laid into Keane, saying: “Nineteen years old, your first trip, do you have any idea how long we’ve been waiting?”

Keane had harboured a grudge against Alf Inge Haaland for three long years after he’d suffered a serious injury in attempting an overzealous tackle on the Norwegian midfielder, then of Leeds United.

In 2000, after Haaland had moved to Manchester City, Keane slammed his studs into his nemesis’s knee during the Manchester derby, and claimed later in his autobiography that “I wanted to hurt him and stand over him and go ‘Take that you c*nt’. I don’t regret that, but I had no wish to injure him.”

There was clearly no love lost between Keane and the player he described as ‘an absolute prick. Niggling. Sneaky.” But Keane maintained that accusations his revenge tackle was premeditated were not true.

When Manchester United wrote to fans defending a ticket price rise and citing Keane’s £52,000-a-week contract among the reasons for the hike, he wasn’t happy.

“I’m still waiting for my apology but I could be waiting a long time,” he responded. “I’m not one for holding grudges but this was a stupid mistake, a bad public relations exercise and something that should never have happened.”

Note to self: Never get on Keano’s bad side.