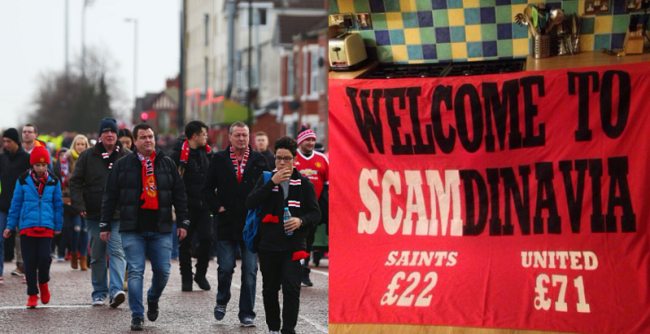 Manchester United fans are quite rightly revolting over the £71 they’re being charged to attend their side’s Europa League tie against FC Midtjylland this Thursday evening.

United supporters have accused the Danish club of exploiting them, especially as Southampton fans were charged just £22 to get in for a Europa League play-off back in August. That’s a 223% price hike, just to clarify.

Many of the 800 or so travelling United fans are planning to protest the premium admission fee, with photos of a pre-prepared “Welcome To SCAMdinavia” banner circulating on social media today.

However, Claus Steinlein, a member of Midtjylland’s exectuive board has come out swinging, insisting that his club are actually doing United fans a massive favour by charging a mere £71 to get in, on the basis that it should be a lot more.

Generally speaking you could say that we could have sold more than 50,000 tickets for this game. So if you look at supply and demand perhaps the price should have been even higher.

That’s the cost of watching a game like this. So I actually believe that we have been very fair and we certainly haven’t had any problems selling the tickets.

We’ll have a sold-out stadium and an excellent setting. That’s what players, coaches, all of the club and all of our region is looking forward to.

It’s going to be a day to celebrate so let’s rather focus our energy on that.

Ah… okay then, if you say so muchacho.