Sunday’s FA Cup action saw Chelsea batter Manchester City 5-1, Crystal Palace Beat Spurs 1-0 at White Hart Lane and West Ham came from a goal down to thrash Blackburn 5-1. After those entertaining clashes, the draw for the quarter-finals was made at Stamford Bridge, with an interesting set of fixtures thrown up by Graeme Le Saux and Trevor Sinclair’s ball-fiddling. 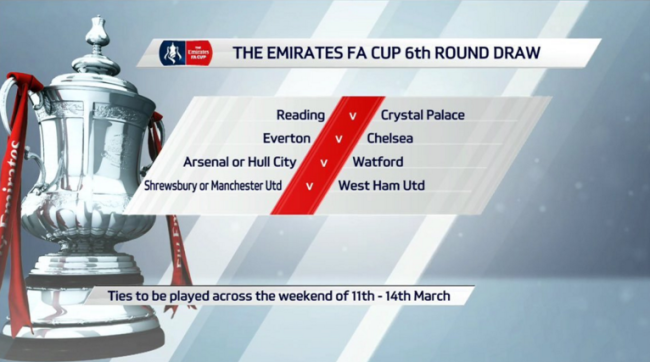 Holders Arsenal, If they manage to get past a very tricky away tie against Hull City, will face fellow Premier League side Watford in yet another home FA Cup game for the Gunners. After all, it is called the Emirates Cup!

Elsewhere, Guus Hiddink’s Blues face a tough away draw at Everton while Alan Pardew’s Palace go to the Madejski Stadium to face Championship side Reading. That leaves Manchester United or Shrewsbury, who play on Monday night in a pressure game for Louis van Gaal, with the winner of that clash hosting West Ham.

All that means that we could potentially have an all-London semi-final line-up. Or not!