Only starting the game after Anthony Martial injured himself in the warm-up, 18-year-old Marcus Rashford made the most of his senior debut for Manchester United in the Europa League on Thursday night.

The teenager bagged a memorable brace against FC Midtjylland to help the Red Devils to a 5-1 win on the night and a 6-3 aggregate victory overall, a result which takes at least some of the pressure of Louis van Gaal. 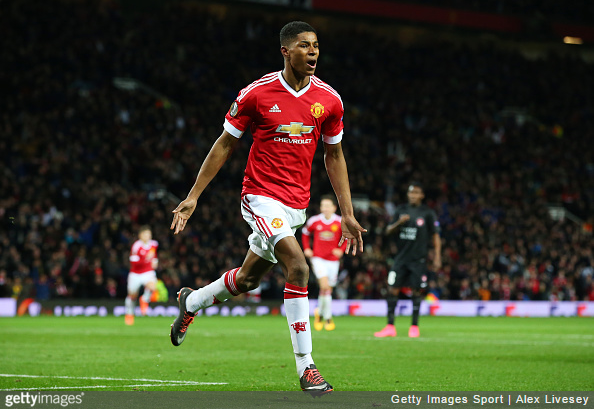 The hosts went into the game 2-1 down from the first leg against the Danish minnows, with the knives out once again for van Gaal.

And when Pione Sisto opened the scoring for Midtjylland on 28 minutes, a shock looked on the cards.

However, Memphis Depay looked sharp throughout and it was his cross which forced Nikolay Bodurov into an OG. Yet there was still time in the first period for Juan Mata to miss a penalty after Ander Herrera was felled in the box.

Then, after the break, Mancunian Rashford took centre stage, firing home from a Mata pass before celebrating with the Old Trafford faithful…

Rashford with a dream debut goal in front of the @ManUtd faithful. Game on at Old Trafford. #UEL #MUFC https://t.co/lvMoOOk2uy

His dream debut got even dreamier on 75 minutes, with the youngster, who was born on October 31st 1997, bagging his brace after good work from Guillermo Varela.

A successfully converted penalty from Herrera and a late Depay strike would ultimately secure a 6-3 aggregate win for United, a result which sees them progress to the last 16 of the competition.

However, it was Rashford’s night, courtesy of a performance which might just have provided van Gaal with his Mark Robins moment.