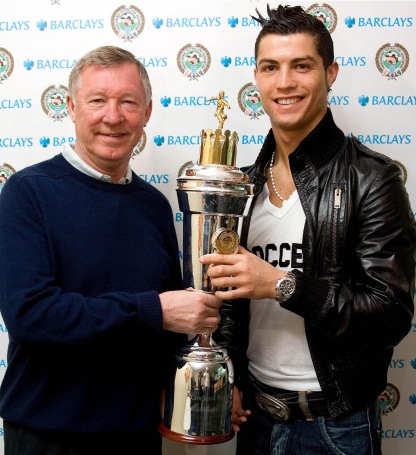 Stop the press! C-Ron has won the PFA Player of the Year, for the second year in a row – no surprise there. Ronaldo was not present in person to collect the trophy ahead of tomorrow’s crucial Champions League semi-final against Barcelona at Old Trafford. But he was shown on a video screen accepting his award from Sir Alex Ferguson at the club’s training ground.
The Man Utd winger becomes only the second player to retain the award, after Arsenal’s Thiery Henry collected the award in 2003 and 2004.

Cesc Fabregas won the PFA Young Player of the Year, for which Ronaldo was also shortlisted. Er, how does that work? Surely if Ronaldo is the best player, then he is also the best young player? Still, I don’t begrudge Cesc winning some recognition for his excellent season.
The PFA Team of the Year looks like this: