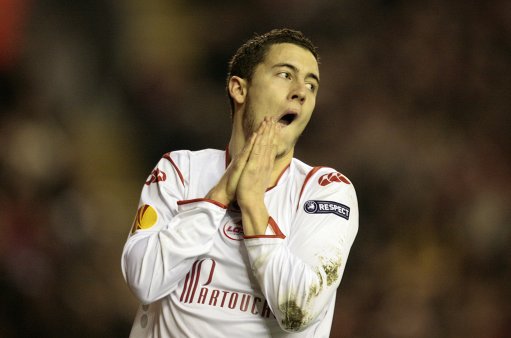 Lille have confirmed that there is no way on Earth they will be allowing starlet Eden Hazard to leave the club during January, despite the 19-year-old being heavily linked with Arsenal, Manchester United, Liverpool, Manchester City, Old Uncle Tom Cobleigh and I over the past few months.

Hazard has been in stellar form of late, with a scene-stealing performance against Monaco at the weekend helping to shunt Lille to the summit of Ligue 1, but both the club’s president Michel Seydoux and the player’s agent John Bico have been quick to quash rumours of the winger’s imminent departure.

“For now, we take pleasure in watching him play, we take advantage! But you know, the sirens did not start this morning. On Sunday (against Monaco), he was incredible. He has warmed us in this cold weather.

“We will not hide, it seems obvious that there will be requests for such a talent. But the player has already understood that he works well here, and that there are people who help him reach his level.

“A nugget is good, but in the middle of the desert it is useless.”

“In January there is absolutely no way for him to leave the club. There is no chance he will be leaving. He will be staying at Lille most definitely.

“I won’t talk about what could happen in the summer but what I would say is there is absolutely no chance he will leave in January as he is in such fantastic form and there is no reason to look elsewhere. He is enjoying his football at the moment.”