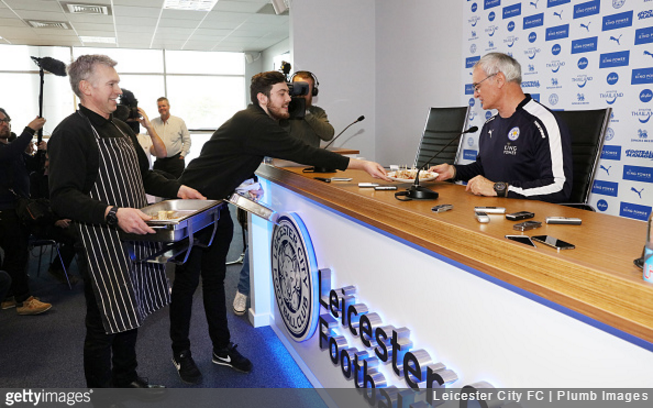 Shortly before the international break, Claudio Ranieri was made aware of a tribute made by a local Leicester butcher in his honour, which saw W. Archer & Sons proudly announce the arrival of the ‘Ranieri Italian-style sausage’.

Made a sausage for our one of our greatest ever managers! Come and try it! @LCFC #leicester #lcfc #Ranieri #butchers pic.twitter.com/7CgtLKSxQQ

The man who broke the news was BBC Radio Leicester reporter Ian Stringer, who dutifully informed Ranieri of W. Archer’s loving pork-filled homage only to be told by the Foxes boss: “Right, I supplied the pizza – you supply the sausages.”

The pact was sealed from that moment, with Stringer returning after the interlull with a tray of Ranieri sausages in tow – a platter he duly presented to the Foxes coach at his pre-Southampton press conference this afternoon.

Magnificent. For fans gradually tiring of the Premier League’s po-faced bluster, the convivial mood enveloping all things Leicester at the moment really is a joy.