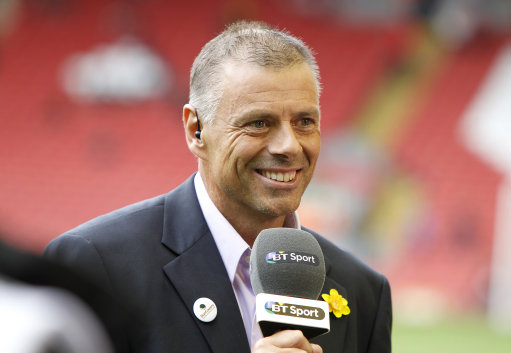 Fight fight fight! It’s fair to say that BT Sport’s decision to used ex-ref Mark Halsey in their live match coverage has been an interesting new development. In his first few TV appearances with BT, Halsey played safe; rarely criticising any of the officials’ decision on the pitch.

However, after receiving an on-screen mauling from a gaggle of pundits including Steve McManaman, the 52-year-old has been far more aggressive in his lambasting of poor refereeing decisions, although overall he does still have the air of a broadcasting loose cannon.

Anyway, Halsey has now published his autobiography entitled “Added Time” and in the tome, the celebrity ref has a pop at a number of his counterparts, by name, for being sub-standard –  something which another celeb-official, Graham “Three Yellows” Poll, is not happy about, and in a phone-in radio spat on TalkSport, the two former men-in black had a right go at each other.

“He is 100% betraying what paid him a living he would never have earned as the warehouse manager he was or the taxi driver he was. The refereeing fraternity are absolutely appalled at what he is doing.

“He hasn’t thought it through. Mark has got to take a long, hard look at himself. He won’t. I know the guy. I have known him for years. He is that type of character.”

After thinking about how to respond, the cerebral Halsey hit back with:

“But that’s Graham. We don’t get on and I don’t like the way he’s done things over the years.”