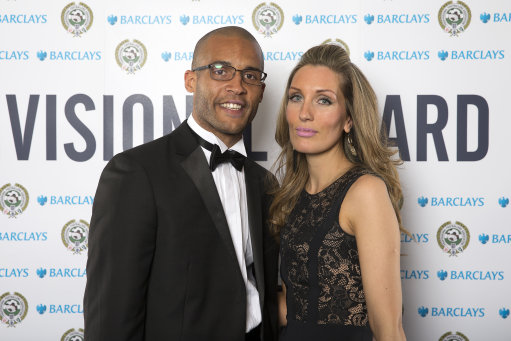 Clarke Carlisle and his wife, Gemma

Ex-Burnley, Leeds and Northampton defender and current ITV co-commentator Clarke Carlisle was hospitalised last night after being by a lorry on the A64 near York.

Carlisle was involved in an accident near the village of Bishopthorpe between York and Leeds at 7:30am on Monday morning and, while his injuries have been described as “serious”, the BBC are now reporting that they are “not life-threatening”.

According to North Yorkshire Police, Carlisle was air-lifted to Leeds General Infirmary where he is currently still in intensive care where’s he’s likely to remain over Christmas, we imagine.

Many players, ex-pros and football fans have taken to social media to wish the former PFA chairman a speedy recovery, with the likes of Joey Barton, Alastair Campbell, the FA, Kick It Out and a raft of football clubs all sending their best wishes to Clark, his wife Gemma and their family.

Don’t normally use this account anymore. But have been overwhelmed with your thoughts and prayers. Thank you

For what little it’s worth, Pies would also like to echo those sentiments.