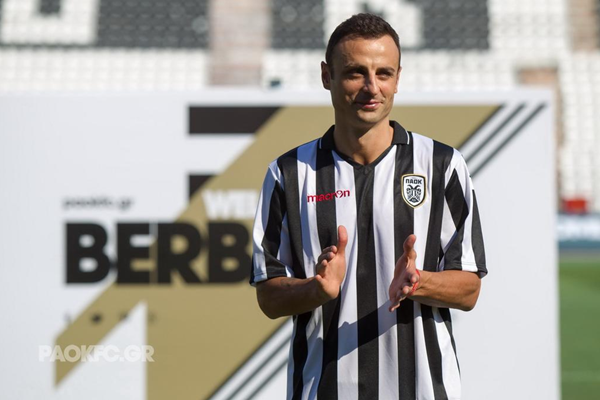 Hard to imagine we know, but Dimitar Berbatov was shown his first red card in 13 years at the weekend after the silken PAOK striker was dismissed for giving an irksome rapscallion a closer look at his elbow.

The incident followed a fairly unsettled few weeks for Berbatov, who has found himself at the centre of a tabloid stramash in Greece over rumours he’s looking to exit PAOK at the first available opportunity.

As such, the Bulgarian has given an exclusive interview to a reporter in an attempt to set the record straight. The slightly weird thing being that the reporter in question is actually himself.

JDB: Hi, How are you feeling..

DB: Hi. I am fine but disappointed. We lost against AEK, and I receive a red card.

JDB: Do you think it was a red card?

DB: Yes. Player from AEK was holding and preventing me from position myself better in the box and this, and the fact, I was angry and nervous, make me hit him.

JDB: But this is not a reason to hit someone! Many football players get held during games.

DB: Yes. This is true. That is way I say again, this is not something that resonate well with the way i see and play football, but everyone can lose his balance and do something stupid during a game.

JDB: Why was you so nervous and angry?

DB: Because of the fact that i was watching the game, and even that AEK was not the better team, they still score a goal. Because i was not playing and i could do nothing to help. This was a derby and i come here to play exactly in this kind of games, where my quality and experience can help the team, and not for me to stay on the bench and do nothing. But the opposite happened.

JDB: And you are disappointed because of this?

DB: Yes. When i don’t play, i can’t be happy. The problem is that, in this case i took it out on the colleague from the other team. And i am not one of this players looking for a conflict, this is a well known fact, but in this case the opposite happened, for which i am sorry.

DB: Now I carry the consequences from my action. 3 games ban. And because of this i say sorry to the team!

JDB: Some media says you don’t want to play for PAOK any more?

DB:This is why I am giving interview to you, and not to people who are coming up with stupid things like this. This is not true, and with this kind of talks some people are trying to harm the team. Or for people to say: “Look at him, he don’t wanna play any more and this is way he get a red card.” Which of course is not true. And the truth is this. I still feel joy when i play football. I want to play.

When this is not happening i am angry and disappointed. There is no way to feel joy from the fact that i am not playing, and they are paying me good money amid all that is happening in Greece.

And I can help PAOK on the pitch, with my football quality I have and demonstrate through my career. When this is not happening, I am disappointed and you can see it. With me, if the passion for football decrease and I stop to get angry, stop yelling and gesticulate on the pitch, then I don’t care for the football or the team I am playing for. The passion is gone.

But this is not the case yet. PAOK is my team now, and I fight for my team, even if this means a red card sometimes.

O…kay. That’s that sorted then.