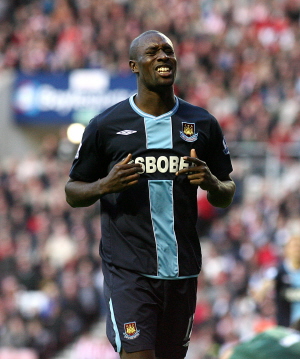 Rumours in the papers this morning suggest that Arsenal will turn to West Ham forward Carlton Cole in a £9 million deal to solve their current striker deficiency, only if Nicklas Bendtner fails a fitness test on Friday. The Dane has missed the last two months due to a groin injury and if tests reveal that he will face a further period on the sidelines then Wenger’s hand may be forced during the transfer window.

One of the benefits a move for Cole would have over many of Arsenal’s other supposed targets would be that the England man would be eligible to play in the remaining rounds of this season’s Champions League.

Cole has been slowly improving over the last couple of years and, as the old Hleb-age goes, ‘no player gets worse under Arsene Wenger’. At £9m, I think Cole would represent decent value for money for Arsenal and also a respectful windfall for the cash-strapped Hammers.

If Cole does leave during January then West Ham are rumoured to be  ready to replace him with… drum roll… Marlon Harewood. The Aston Villa striker is known to be surplus to requirements at Villa Park and has recently returned from a fairly successful spell out on loan at Newcastle.

Harewood forged a decent partnership with Shola Ameobi and managed five goals in 15 appearances at St. James Park but the Magpies are unwilling to extend his deal, which may have something to do with the rumours of Jermaine Beckford being pretty high on their New Year’s shopping list.

A steadily improving, England international striker for a bit of a journeyman who is slightly worse in all aspects. Not the greatest trade-off in the world, is it?