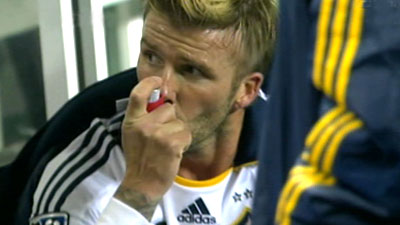 Just a day after Pies pointed out that Becks currently resembles a windswept junkie, news reaches us – and the rest of the planet – that Becks suffers from asthma, and has done since the age of four. He’s not a golden demigod after all – he’s just like the rest of us!

The midfielder was snapped puffing on an inhaler during the MLS Cup final, and one of his minions has since issued the following statement:

“David has suffered with this since he was a young boy but obviously it has had no effect on his performance. He has never sought to make it public but, if it does inspire any sufferer to think they can achieve great things, then so much the better.

“Some of the best athletes in the world suffer from asthma and there is no problem with his aerobic fitness.”

Looks like Team Beckham is keen to reassure the world – but especially Fabio Capello – that Prince David will be able to cope at high altitude in next summer’s World Cup.

Beckham’s asthma is mild – I suffer from mild asthma too – so he should be fine in South Africa (Frank Lampard also suffers from asthma, for example) but I think it’s very wrong – and indeed very selfish – that Becks has sought to hide his condition from the world, when he could have done a hell of a lot (see Paula Radcliffe) as an ambassador for the disease. For his spokesman to say, almost as an afterthought, ‘Hey, if some kids are inspired by this, fine by us…’ is not good enough. Be active…

Imagine how much money Becks could have raised for asthma research; imagine what a positive, shining message he could have sent out to the many thousands of kids with asthma; imagine how many more people would be aware of asthma with Beckham’s support in the last decade.

Instead, Beckham chose to conceal his asthma, I would imagine because he thought such a revelation would in some way taint his golden boy image. Well Dave, sometimes the weak become heroes. Shame on you.