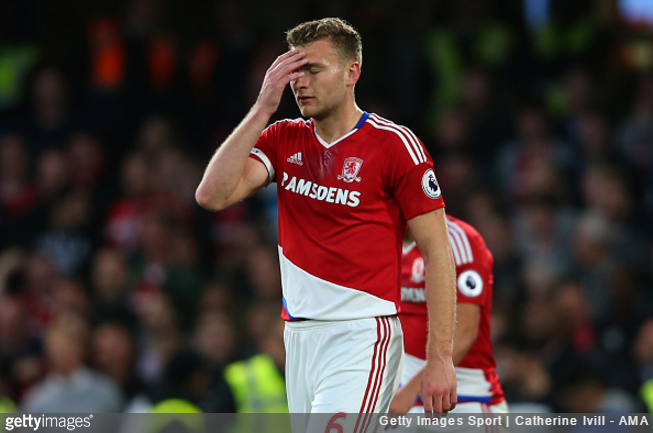 While it hardly came as a turn up for the books, Middlesbrough were relegated from the Premier League after getting themselves steam-rollered by Chelsea on Monday night.

The result, coupled with a season of lamentably insipid displays, appears to have taken it’s toll on Boro’s homegrown captain, 24-year-old defender Ben Gibson, who was understandably beside himself by the end of the evening at Stamford Bridge.

Speaking after the final whistle, Gibson cut the figure of an exhausted man who has spent the last 10 months fighting against an irresistible tide.

It means so much. We’ve got to put it right. It’s not just about tonight. It could have been four, five or 6-0 but it’s been over a full season.

From top to bottom we haven’t been good enough: players, staff, myself … we have to reflect on what’s gone wrong.

After the highs of last season we’ve wasted an opportunity to play in the best league in the world. We have to make sure we come back stronger.

The chairman, Steve Gibson, and those fans, they deserve Premier League football.

People say he’s the best chairman in the country and our fans were singing until the end there.

They all deserve top-level football and we have to find a team to do that.

In truth, Boro have been fairly pallid all season, seemingly set up to play for the 1-0 defeat week in, week out by Aitor Karanka, who was latterly replaced by an altogether less focused caretaker in Steve Agnew.

That said, having even found his way into an England squad over the course, Gibson is one of the few Boro players who will emerge from their risible season in credit.

Bids from top-flight suitors will no doubt be levelled in due course. Whether his familiar links will be enough to keep him at the Riverside beyond the summer remains to be seen.