There’s an advert on television at the moment asking what information overload has done to us. If you haven’t seen it already, two women are having lunch together in what appears to be a fashionable restaurant when a question from one of the pair causes her friend to apparently short-circuit and begin spewing random irrelevant facts with alarming speed, drawing the bemused attention of the other restaurant-goers and embarrassing her companion. The advert then poses its key, pertinent question, before somewhat confusingly plugging a new search engine on this here internet.

The inconsistent message of the advert aside, an interesting point is raised. During the World Cup this year, a certain fatigue was evident amongst supporters. Way back when, international tournaments used to be the only chance people would get to see the best foreign players, lending the event an unmistakeable exoticism. These days wall-to-wall coverage, the Champions League and the presence of foreign imports in the Premier League have long removed our ignorance of football abroad. 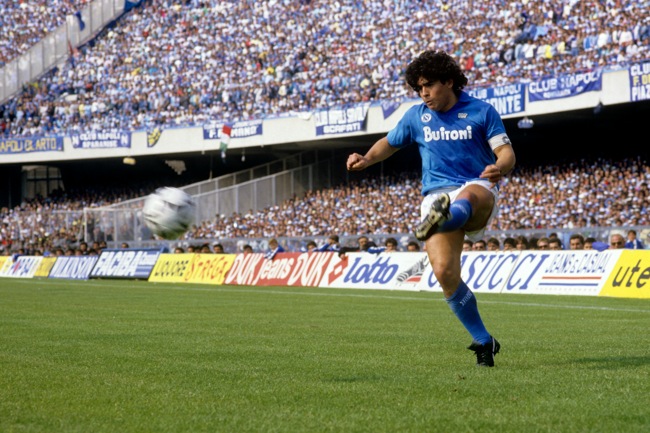 May 1987: Very few British football fans had the chance to watch Diego Maradona in his pomp, playing for Napoli in Serie A

Twenty-four years ago, the first time many people would have become acutely aware of Diego Maradona was by watching Argentina knock England out of the 1986 World Cup. His equivalent these days, Lionel Messi, can be seen playing for Barcelona every week, either in La Liga or in European competition. By the time he arrived in South Africa for the World Cup in June, as wonderful as he is, Messi had nothing new to offer us; no one was speaking in hushed tones about a brilliant young talent from Argentina – after all, we’d already salivated over him putting four goals past Arsenal in April.

On your average weekend now, it has become possible to settle down and take in around eight matches from several leagues. It is not unheard of for four Premier League games to be shown live, followed by the highlights of all the games on Match of the Day, Football First and Goals on Sunday, while Sky broadcasts four matches from Spain, and ESPN offers, among others, Italian, German and Dutch football. Oh, and if you possess even a mere smidgen of technical knowledge you can find almost any match you want online. Furthermore the presence of countless excellent online columns and blogs on European football removes any excuse for ignorance, and on the off chance your club is linked to an obscure player, all you need to do is type his name into YouTube where you will be confronted by a montage of Loic Remy’s best goals, set to a jaunty hip-hop beat.

Choices, choices, choices. Saturation is not necessarily an evil, but football was not always this easy to come by, certainly not when I was growing up and first taking an obsessive interest in the game. Then football did not dominate the schedules as it does now. Domestic games were already on Sky, of course, but we did not have it in my house. Indeed, unlike now, few people appeared to have a dish. At my age, too, staying up to watch Match of the Day was done at the behest of my parents, which was not often. There was, however, one glorious alternative: Channel Four’s unparalleled coverage of Serie A on Sunday afternoons, hosted by the peerless James Richardson. 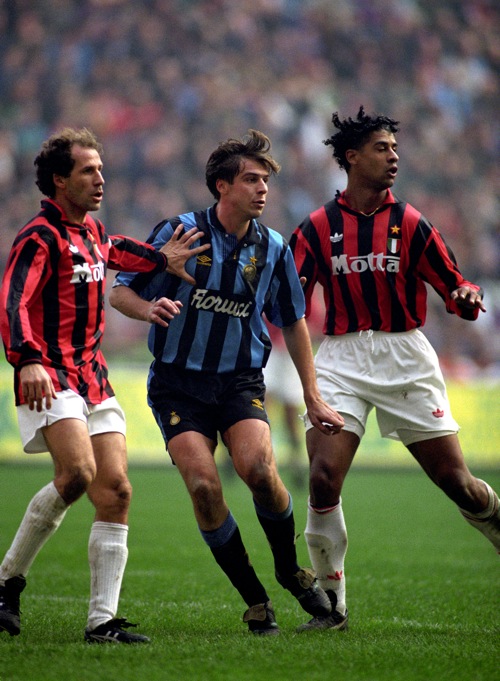 November 1992: A snapshot of the Milan derby, starring Baresi, Berti and Rijkaard

Here was a genuine journey of discovery and even though it was on every week, it still left you wanting more. With no prior knowledge of the teams or the players, the only sensible thing to do was to watch the matches and make your own judgements. At the time the continent still carried its own mystique; it remained exotic, a little threatening, patently superior to our still maturing, callow, pre-sports science league.

A glance at the Serie A table from around that time reveals the extraordinary competitiveness of the league. Conceivably there were seven teams capable of taking the title: Juventus, Milan, Lazio, Inter, Roma, Fiorentina and Parma. All challenged, and while Milan and Juventus swapped titles with regularity, they were often pushed to the limit by the others as each team possessed proven world-class players, all infused with technical and tactical prowess.

Italian clubs were the enduring dominant force in Europe too. Milan reached the Champions League final in 1993, 1994 and 1995, while Juventus reached it in 1996, 1997 and 1998. Each won it just the once, but by contrast, in that time period, the furthest an English club got was one measly semi-final in 1997, where Manchester United were knocked out by Borussia Dortmund.

In that season United were drawn in the same Champions League group as Juventus. To my naïve young eyes, the champions of England, double winners no less, would be more than a match for the champions of Italy. At the Stadio Delle Alpi, Sir Alex Ferguson’s team received a pointed lesson in the gap in class that would have permanently scarred lesser teams. The game finished 1-0 thanks to an Alen Boksic goal in the first half, but there cannot have been many more one-sided encounters between two marquee names – wave after wave of attacks stretched the United defence to breaking point, the sheer intensity of the Juventus machine rendering the visitors utterly helpless and Eric Cantona an irrelevance. The golden boy of English football, Ryan Giggs, was removed at half-time, a defining moment that confirmed Serie A’s asphyxiating pre-eminence.

This was a ruthless shellacking, both in mind and in body, if not on paper. Remember that this season United reached the last four of the competition, one they would win outright two years later, beating Juventus – and Inter – along the way. The return match at Old Trafford was more even, but Juventus won again thanks to a single penalty from Alessandro Del Piero. 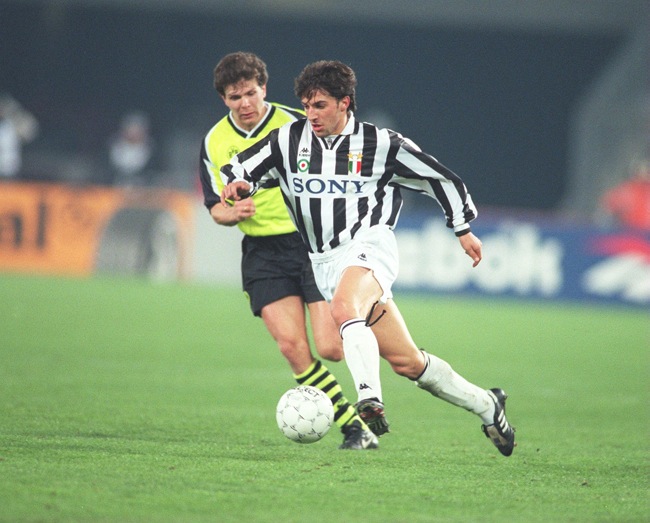 November 1995: Del Piero in action for Juventus against Borussia Dortmund in the Champions League. He’s being chased by Andy Möller

Ah, Del Piero. Now here was a player, fast, skilful and as deadly a free-kick taker as there has been in the last twenty years, who confirms the joy of discovery, of scouting from your own living room. I first started to watch Serie A in the 1994-95 season, when Juventus, their attack spearheaded by Fabrizio Ravanelli and Gianluca Vialli, took the title, but one of the first matches I can remember watching took place early in the following season. In early October Milan, managed by that notorious buffoon Fabio Capello, welcomed the champions to San Siro. By half-time it was 2-0 to Milan, and Juventus had barely had a kick. In London I watched jaw agape at the improbable, bewitching skills of George Weah, who had scored one of Milan’s goals and spent the rest of the half terrorising the Juventus defence. Ravanelli and Vialli were a mere afterthought. This was new. This was unexpected. More than anything, this was an illustration of the transience of football.

Then at half-time Marcello Lippi introduced Del Piero, another mystery to unravel. Within minutes he had reduced Milan’s lead to just the one goal with a careful left-footed shot into the bottom corner, and in stoppage time he nearly provided the equaliser with a tantalising cross that a team-mate missed by inches. I was enthralled, captivated by this young challenger to Ravanelli and Vialli, two players who looked like they shouldn’t have been playing football in the first place, one silver-haired, the other completely bald.

In one match, anyway, on a small television I had been introduced to the wonders of George Weah and Alessandro Del Piero. No Twitter, no YouTube, no blogs, just me and my eyes. For better or worse, everyone is an expert now.

A few weeks earlier, in the first game of the season, I had found about another rare talent, the intimidatingly ferocious free-kicks of Roberto Carlos, who had wound one up on his debut for Inter and, with one thud of his left foot, sent the ball flying past the stunned Vicenza goalkeeper. In London, I turned to my dad. “Blimey,” we both agreed.

Although Milan cantered to the title in 1996, there was so much more to admire about the league. Parma had the tricky, elusive duo of Gianfranco Zola and Faustino Asprilla in attack; Fiorentina had the single-minded Gabriel Batistuta and the delightful promptings of Manuel Rui Costa; Inter offered the marauding of Javier Zanetti and the sublime intelligence of Youri Djorkaeff; Roma answered that with Cafu’s charges and Francesco Totti’s flicks and tricks; Lazio had the combustible, slouching Beppe Signori. My enduring memory of that season, though, was finding out about Sampdoria’s Enrico Chiesa, who scored a dazzling volley in one match which, 14 years on, I am convinced he arrowed into the top corner from the right touchline (to my eternal frustration, I can‘t find the clip).

In 1997, Inter agreed a deal to sign Barcelona’s phenomenon, Ronaldo. Now everybody knew about him, and his arrival was naturally greeted with much fanfare. I had only seem him play live once, when Barcelona won the European Cup Winners’ Cup that year, so the first televised game of the 1997-98 season, Inter at home to Brescia, was a special occasion. For long periods, though, Brescia threatened to spoil Ronaldo’s debut., but in the end, Inter’s South American saved the day. Just not the one you’re thinking of. With time running out and Inter trailing, on came a chubby, unfamiliar Uruguayan by the name of Alvaro Recoba. He was also making his debut. Within minutes he had spanked a shot with his left foot into the top corner from fully 35 yards out, and then used the same foot to curl a delicious free kick around the wall and past the Brescia goalkeeper. Talk about stealing the limelight. Sometimes ignorance really is bliss.