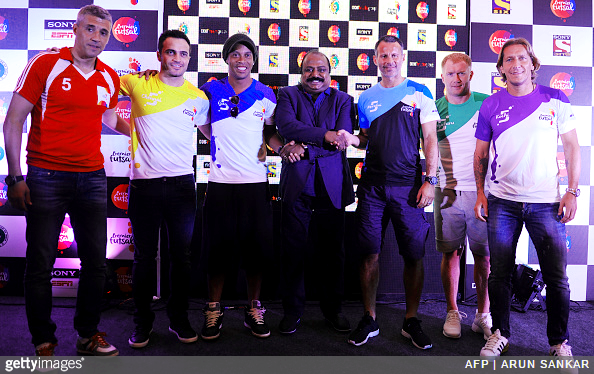 With mortgages and ‘lecky bills to pay, the likes of Ronaldinho, Paul Scholes, Ryan Giggs, Michel Salgado and Hernan Crespo are all out in Chennai at the moment to take part in the inaugural Indian Futsal League tournament.

Old Man Giggs flexed his silky skills in Mumbai colours a few days ago, but Sunday saw Ronaldinho go up against Scholes as the former’s Goa team took on the latter’s Bengaluru side.

Perhaps surprisingly it was the Brazilian exhibitionist who came out on top, scoring five goals in a 7-2 rollicking – including a hat-trick rattled off before half-time.

However, Ronaldinho’s goal of the game came in the second half when he plopped a nonchalant outside-of-the-boot lob into the Bengaluru goal and celebrated with a wee swing of the hips…