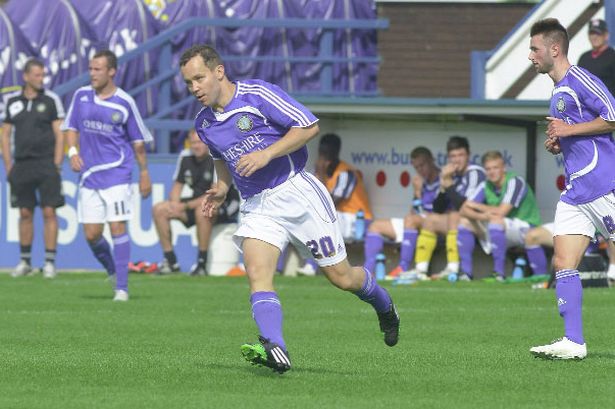 Gorfin in action, shortly before it all went tits-up

Remember when Macclesfield Town offered one fan the chance to play for their first team in a competitive league or cup game in return for just £20,000 not so very long ago?

Well, the offer was quickly bumped down to an appearance in a pre-season friendly after the Conference Premier board stepped in and voiced concerns that letting any old Tom, Dick or Harry play in a proper game may just serve to slightly undermine the integrity of the competition in question.

Anyway, Macclesfield then knocked down the price of their “fan package” to £10,000 and it was duly snapped up by local business man James Gorfin, who made his debut for the Silkmen yesterday in a pre-season friendly against Stoke. A baptism of fire if ever there was one.

Having come on as an impact sub in the second half, Gorfin  – who’s wife and kids were cheering him on in the stands – lasted a full nine minutes before he twanged his groin while over-reaching for a cross and had to be taken off – thus ending his career in professional football.

After limping back to the bench and having an icepack gaffer taped to his inner thigh, Gorfin told the Macclesfield Town website:

“I think everyone reckons they could do better when watching a game but it’s not as easy as that. You think you’d have loads of time on the ball but it’s pretty mental how quick the game is and I did get smashed by one of the Stoke lads when I got one of my passes away.

“Obviously I’d have loved to have got on that cross and scored but I couldn’t quite sprint quickly enough to get on the end of it.

“I tried to put a burst on and when I stretched, that’s when it went, I felt it straight away. I was pretty gutted, it would have been unbelievable if I’d got on the end of that and scored.

“I’m limping around and it’s still hurting but a few drinks in the bar afterwards helped me to recover.

“Before I left, I did mention that if they ever get really short they could give me a ring … I don’t expect they’ll ever be that short though!”