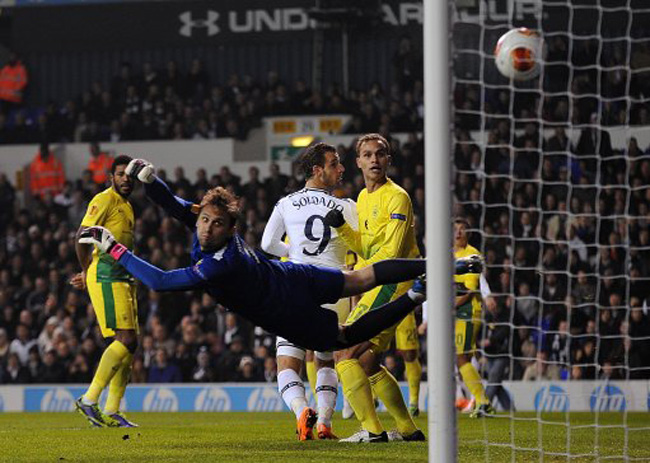 I decided to amalgamate the performances of the three English sides in last night’s Europa League into one little compendium of photos due to sheer laziness. So sue me, yeah!?

Anyway, Spurs’ misfiring Spaniard Roberto Soldado finally found his shooting boots against Anzhi at the Lane on Thursday, netting a hat-trick as the home side battered the once uber-rich visitors. Lewis Hotlby also scored a right cracker although both sides were already through so there was little of note to play for.

Michale Laudrup’s inconsistent Swans also made it through despite losing 1-0 away to St Gallen. The Welsh side created a few chances but were ultimately downed by a late goal from the hosts. Still, they still managed to finish second in group A, five points behind table-toppers Valencia, and thus qualify for the knockout stages.

However, Championship side Wigan weren’t so fortunate, finishing bottom of Group D after losing 2-1 away at Maribor. It was a rather odd game, with both players going down to 10 men and both sides scoring from penalties.  Chris McCann’s early sending-off, after he received an extremely harsh second yellow for a handball in the box, was the most bizarre of the decisions in a game which eventually sealed the Latics fate as Group D’s bottom side.

Photos (only of the Spurs and Wigan games, no photos yet for Swansea!)…