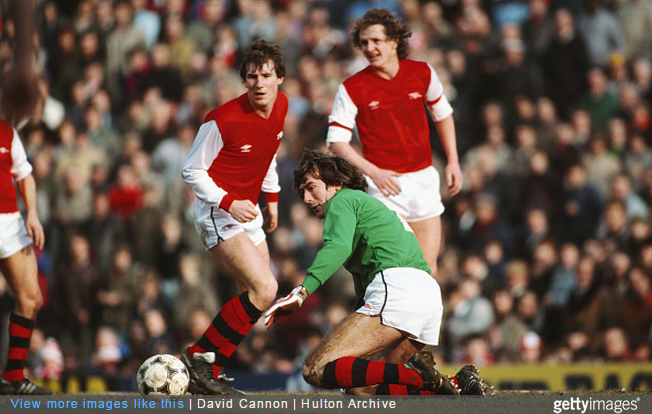 For many Tottenham fans, Pat Jennings remains the best goalkeeper the club has ever had. So imagine the pain and the shock when, following the Lilywhites’ relegation in 1976/77, the club sold Jennings to dear neighbours Arsenal for £45,000.

Jennings had been a Spur since 1964, made 590 appearances for the club, and helped them to win an FA Cup, two League Cups and the UEFA Cup. He also once famously scored a goal, against Manchester United’s Alex Stepney in the 1967 Charity Shield. Famed for his big hands, Jennings was a superb shot stopper.

By 1977, Jennings was 32 and then-Spurs manager Keith Burkinshaw thought the big keeper was past his best. Some of Jennings’ former team mates have wondered whether Burkinshaw and the club were, in part, also embarrassed at having to ask such an illustrious keeper to play in the old Second Division, but Big Pat told the Belfast Telegraph years later that the manager had told him he was surplus to requirements.

Burkinshaw later admitted he’d made an enormous mistake. Jennings went on to stay between the sticks at Arsenal for eight years, helping the Gunners to four cup finals in three successive years.

Jennings remains enormously popular at both North London clubs, a rare occurrence and evidence not just of his ability but also of the quality of the man himself. These days he works as a match day host at White Hart Lane, and Spurs fans maintain at heart he’s still one of their own – a feeling helped by a story from the 1980s.

In April 1983, Spurs thumped Arsenal 5-0 at White Hart Lane. As the Arsenal team bus was serenaded with joyous chants of “5-0” as it left the ground, legend has it that Jennings, sitting at the back of the bus, turned to the window, smiled, and discreetly raised five fingers.