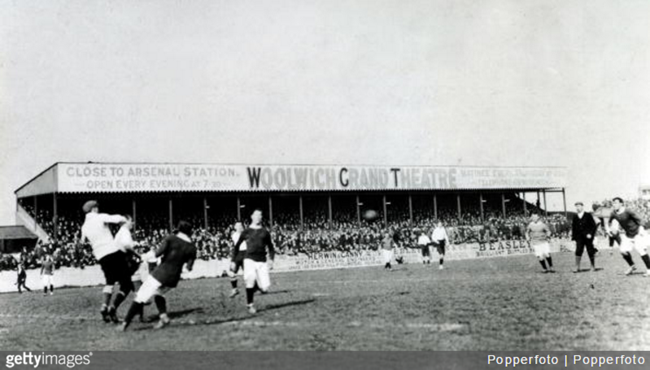 With the next North London Derby fast approaching, and this one really shaping up to be a vital tussle, it’s worth reflecting on the origins of the great rivalry, especially on the anniversary of the decision that kicked the whole thing off.

It was on 22nd February, 1913 that Woolwich Arsenal revealed their decision to uproot from their home in Plumstead, South East London and move to a brand new stadium in the North London district of Highbury.

Attendances at the Manor Ground in Plumstead (pictured above), where Woolwich Arsenal played, had been declining. Majority shareholder Henry Norris had originally wanted to merge the club with Fulham, but the Football League ruled this new side would have to play in the old Second Division, and Norris baulked.

He decided the Gunners had greater potential, but only if they could move to somewhere with better transport links and a catchment area with more oomph.

The site he identified was the sports ground of St John’s College of Divinity in Highbury – literally just down the road from Tottenham.

Local residents objected, as did Spurs and Clapton Orient, but the move went ahead anyway.

It proved successful, with attendances doubling in the first season at the stadium designed by Archibald Leitch – the very same architect who designed White Hart Lane.

The move across town also set up a tense relationship with neighbours Tottenham, one that was made all the more fraught in 1919 when Arsenal were granted membership to the newly expanded, 22-team First Division at Tottenham’s expense in questionable circumstances.

To this day, Spurs supporters still wind their neighbours up by calling them the Woolwich Nomads, and not a derby goes by without Tottenham fans loudly advising their rivals to return from whence they came.

Arsenal fans usually retort by trotting out the fact that Tottenham was in the county of Middlesex until 1965 and so Spurs’ claims of being a North London team are fragile at best.

However, this is a rather dry and blinkered reading of local government bureaucracy.

The fact is that suburbs such as Tottenham had been considered part of London since at least 1840, when it had been brought under the Metropolitan Police’s area of responsibility.

Unlike other counties, Middlesex had not had a single established county town since 1789, instead regarding London as the county town, further establishing Tottenham as part of London in the public eye.

The fact that the administrative naming conventions of local government structures did not reflect the reality of the situation really rather undermines the Arsenal fans’ entire (and rather bureaucratic) riposte.

That said, I don’t for a moment suspect that this will be the final word on the subject!