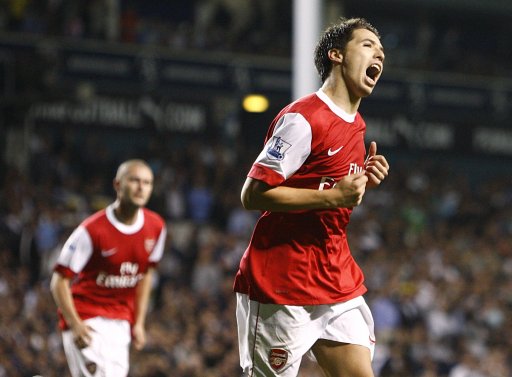 With the scores level at 1-1 after 90 minutes, Tottenham eventually went down 4-1 at home to Arsenal in the Carling Cup last night thanks to a three-goal extra-time salvo.

As normal time wore on Spurs arguably had the better chances to sneak the win, but two minutes into extra-time the course of the game swung decisively in Arsenal’s favour as Samir Nasri won (tumbling very easily after having his feathers ruffled by Sebastien Bassong) and dispatched a penalty to restore the Gunners’ lead.

The fairly comfortable win was rounded off in the 105th minute, when Andrey Arshavin drilled home an angled finish but, despite the damning scoreline, it was Nasri’s willingness to hit the deck that seemed to be the focus of Spurs manager Harry Redknapp‘s ire after the game;

“I thought the first penalty was harsh. I thought Nasri dived. The second was blatant. It was Caulker’s first appearance anywhere near this level and was a good experience for him.”

Bassong, the player that ‘fouled’ Nasri to concede the spot-kick, was equally condemning of the French midfielder’s actions;

“He told me afterwards that I barely touched him. It leaves a bad taste in my mouth. I touched Nasri’s chest but I did not grab him. I have seen the video and from my point of view it was not a penalty.”