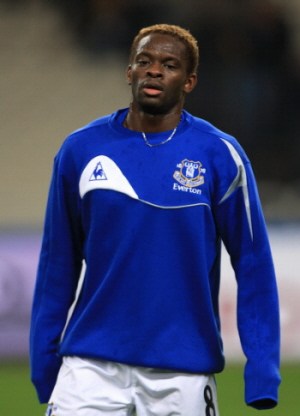 Could Saha handle it at Arsenal? Apparently not

Louis Saha‘s future at Everton has come under speculation recently after his contract negotiations with the Toffees have stalled. It is thought that the French striker’s wage demands (£60,000-a-week) have become a sticking point as the Goodison club try to redefine the terms of Saha’s current pay-as-you-play deal.

The news has alerted a few interested parties (Tottenham and Liverpool are known admirers of the forward) but Arsenal look like being the first club out of the blocks with an approach for Saha who, after being linked with some audacious transfers recently, represents are more realistic target for the Gunners.

Saha would fit in well at Arsenal. He is pacey, skilful in and around the box and is capable of sublime finishing at times. If he gets a prolonged run in the team without injury (a big ask) then he is comparable to any of the strikers Arsenal have been linked with in January. Arsene Wenger has made it a precedent not to give players older than 30 long-term contracts, so a similar rolling deal to the one Saha currently has at Everton would be the most likely solution.

I think this could be a potentially fantastic move for both parties – Arsenal need a proven goalscorer and Saha would surely relish playing in a team where he would recieve so much decent service.

What do the Pies faithful reckon? Could Louis Saha be a viable replacement for Robin Van Persie? Would a low fee/high wage transfer represent good value for the Everton top goalscorer?