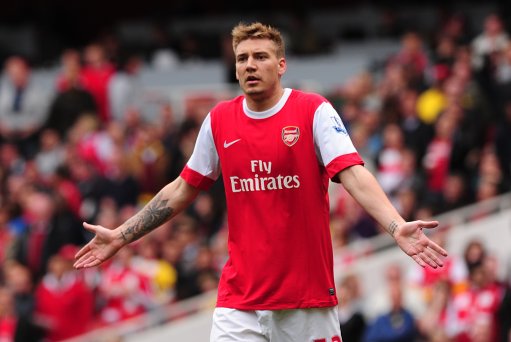 Stop whatever it is you’re doing! Nicklas Bendtner has released a statement. A statement in which he sort of claims that Arsenal blocked his prospective move to Crystal Palace as the club failed to bring in adequate striker reinforcements (i.e, Demba Ba) over the summer.

Speaking via his incredibly imaginatively named handlers, International Football Management (gee, we wonder what those guys do?), Bendts said thus:

It’s no secret that Arsenal and myself had agreed that I could leave the club during the 2013 summer transfer window subject to an agreement between all parties.

An agreement had been reached with more than one club this week but as Arsenal were unable to secure the services of another striker, they reserved their right to not sanction any deal to be concluded…

Naturally, I was very disappointed as I was looking forward to a new challenge, with a new club and a fresh start in English football.

Many things have been said about my where my future lies after many years at Arsenal; the truth is I just want to play football which is when I’m happiest and Arsenal is a fantsstic environment for any professional to apply their trade. I still feel very strongly about Arsenal Football Club and following positive talks with the Manager, I am looking forward to working hard to regain full fitness and doing my very best to help to the team and the Manager fulfil our objectives and ambitions this season.

I’ve learnt a lot from my loan experiences at Sunderland and Juventus and I want to assure all Arsenal fans that I will give everything I have to contribute to what I believe will be a successful season for the club.

So there you. Nicky wanted to go, got forced to stay but will continue to conduct himself with the same impeccably high standards as he always has for the Arsenal. God help ’em.

Still, we reckon most Gooners would still rather have Bendtner on the books than Park Chu Young, no?