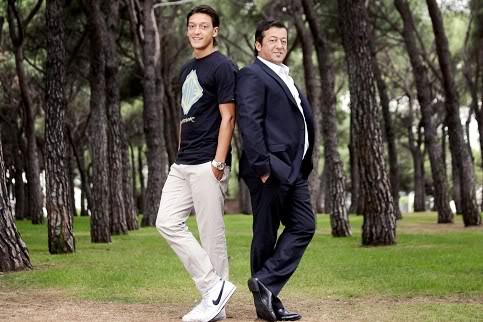 Mesut Ozil’s father has threatened Real Madrid with legal action as the ugly fallout of his son’s deadline day move to Arsenal continues to stink up the place.

In case you missed it last week, Madrid president Florentino Perez was quoted as saying that Ozil was allowed to leave the club as he “wasn’t a good professional and was obsessed with women and nightlife” and that he developed an unhealthy obsession, or “mad passion” as El Mundo Deportivo put it, with Colombian supermodel Aida Yespica – and sweet Jesus, we can see how that could be an issue – that distracted him from his professional duties.

All very sordid and trashy, we’ll sure you agree. The theory is that, after the Real execs suffered a significant amount of backlash from their fans for offloading a very popular player (Ozil) in order to bring in a certain over-priced Welshman, Perez has concocted an excuse and decided to bury the German international to justify his sale.

Understandably, Mustafa Ozil has reacted angrily to the supposed defamation of his son, ranting that he may sue Real Madrid if forced to, telling Bild:

“Just because a man earns a lot of money doesn’t mean he’s a man of honour, and Perez is no man of honour. Mesut is supposed to be the scapegoat now and I’m the greedy father. A put-up game. We will defend ourselves legally.

“If Mesut had an unprofessional life in Madrid, then why did he always play? They want to blame him now, because the fans and team-mates are angry.”

The original article on the website of Spanish news outlet ABC.es is mysteriously unavailable now (Lady Arse have a full translation). While it states that Perez spoke about Ozil in an entirely unrecorded meeting with his fellow Real members, no cameras, no microphones, no nothing, he’s still quoted verbatim as saying Ozil had behaved “unprofessionally” and that, basically, he’d been chasing tail until sparrow fart in the morning.

Now, we also hearing that “FIFA agent”, Real Madrid patsy and known fibber Francois Gallardo has joined the character assassination attempt on the Ozils, claiming that Mustapha had been aggressively attempting to double his son’s salary for months and that he openly touted Mesut on the transfer market behind Real’s backs once he learned of their intentions to sign Gareth Bale (more on that here).

Basically, it would seem that poor, defenseless little Real Madrid are either the victims of a cruel and unjust campaign of oppression on the part of Mustapha Ozil, or that they’re now feeding stories to the press in a desperate attempt to cover up the fact that they screwed up royally by letting Mesut Ozil go.

Feel free to decide for yourselves.