Transfer Balls brings you the gossip and nonsense presented as news by the dead tree Press. And now Arsenal are in on the act.

On the Arsenal.com Media Watch page fans are given links to Arsenal players being name-checked in the newspapers. You get reports of them being picked for their national sides, what they said in interviews and so on.

But now the page trots out every half-baked rumour without adding any facts. You’d think the actual club could shine light on the rumours of players being linked to the club by nameless sources, but it doesn’t.

Here are a few examples of Arsenal’s balls.: 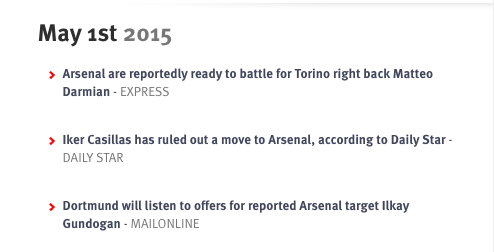 Are Arsenal, buying Torino right-back Matteo Darmian? Did they offer Iker Casillas a deal? Have they called Dortmund about Ilkay Gundogan?

Arsenal like playing their cards close to their chest so why amplify rumours? Why talk in the third person? 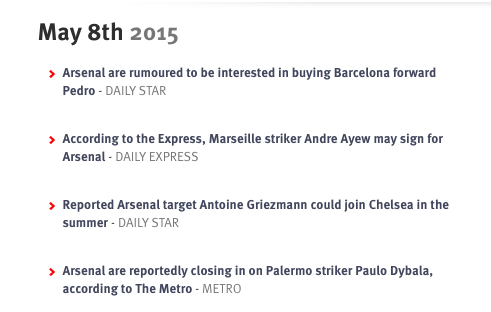 Since May 1st, this long list of players have featured on the Media Watch Page as potential future Arsenal footballers:

A mere 29 players have been linked to Arsenal since the start of May – and the club has broadcast each rumour.

It gets worse. On Twitter, Arsenal are talking about players who play for other clubs: