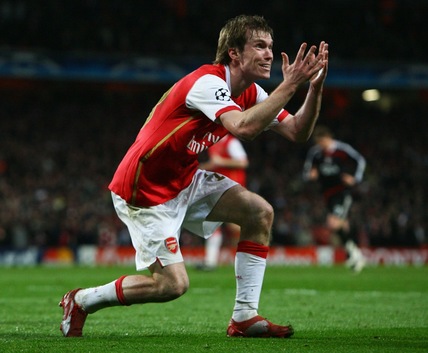 Hardly anyone had heard of Alex Hleb before he came to Arsenal, in 2005 – he was a nothing player, playing in Germany for a mediocre club (Stuttgart). He was pretty shit in his first season, not a lot better in his second, and pretty good – in patches – in their most recent campaign. Arsene Wenger could easily have got rid of him a couple of years ago, but he stuck by the Belorussian.
How does Hleb repay Wenger’s patience and faith? By allegedly sharing an ice cream with the Man from Inter Milan, and then getting his poxy agent to bitch and moan about how hard Hleb is finding life in London: “Alexander is just tired of the noisy and chaotic life in the British capital and feels like living in calmer surroundings,” said Nikolai Shpilevski, the man who will apparently decide Hleb’s future.

Shpilevski continued: “Hleb has been playing in London for three years now and isn’t sure whether in the future he can show the level of talent that he is showing currently… I can only confirm that some of the world’s biggest clubs are interested in him.”
Here’s a thing: Hleb has scored less than ten league goals in his entire Arsenal career, a terrible return for an attacking midfielder who often dances into scoring positions.Granted, Hleb has had his best season in England, but he’s not exactly set the Prem alight. Do Inter Milan, favourites to secure his signature, or any other big club, really want that level of talent?
I bet Wenger is much more pissed off to lose Mathieu Flamini than he would be to see the back of Hleb. As Arseblog responds: “Fuck me, did you ever hear such a load of shit in all your life? Pathetic. Fuck off, Hleb and take your wankhammer of an agent with you.”
(Note to self: must remember to use “wankhammer” in more sentences…)
In my opinion, it would be a big mistake for Hleb to leave – but now that this story has come out in the media, it might not be much fun for him to stay, in terms of the abuse some Gooners might aim in his direction. Still, I have little sympathy for Hleb, and even less for his agent.