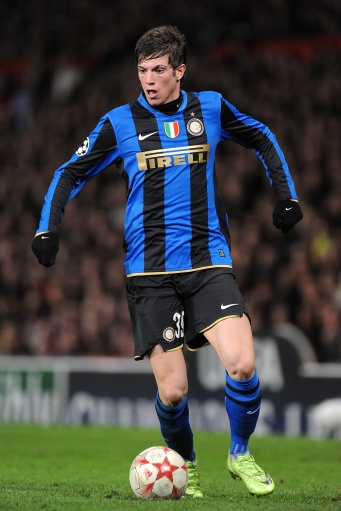 This may be a little hard to fathom on first read but it would seem that Inter Milan coach Rafa Benitez, a man famed for his geniality and complete lack of persecution complex, may have begun alienating members of his squad during his six months in charge of the Nerazzurri.

One such player is highly-rated (former Italy coach Marcello Lippi branded him the ‘new Paolo Maldini’ not so very long ago) full-back Davide Santon who, after seeing his career being to gain momentum over the last few seasons, has seen it grind to a halt under Rafa’s stewardship.

According to Santon’s agent, Renzo Contratto, the 19-year-old is now considering his options at the Giuseppe Meazza, and is due to open talks with three London-based Champions League sides:

“Of course he [Santon] wants to move to England and he has a number of different options, Arsenal, Chelsea and Tottenham. We have a number of meetings lined up for the coming days with them, we’ll know more after that point.

“He deserves and wants to play for high level clubs, his eyes are now away from Inter. A move in January would be possible but it will more than likely happen in the summer.”

Contratto continued, citing Benitez’s influence as the main reason behind his clients unrest:

“The player is unhappy with the situation because he keeps playing in different roles, meaning there is no clarity from the coach.

He’s waiting for the World Club Cup to end, we’ll then sit down to have a meeting with the management at Inter to decide his future.”

Who’d of thunk it? Rafa having a detrimental effect on a once-perfectly manageable squad morale? I give him three weeks.