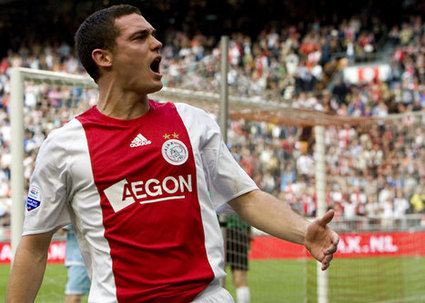 Arsenal are close to signing Thomas Vermaelen for around Â£10m. But will the highly rated Ajax centre-back turn out to be the new Tony Adams, or the next Philippe Senderos?
From what I’ve seen of the 23-year-old Belgian (on YouTube mostly) he can’t properly be compared to either Adams or Senderos. Vermaelen is a much smaller defender (just 5ft11in), which may not play in the Premier League – even though Fabio Cannavaro, who’s shorter than Vermaelen by a couple of inches, has proved that you don’t need to be 6ft+ to thrive at the highest level.

On the plus side, Vermaelen looks more mobile than your average big lunk of a centre-half, and he looks like he’d weigh in with a few goals, as this clip shows:

Still, I’m not sure Arsenal wouldn’t be better off buying a big, ugly brickhouse – someone in the mould of Nemanja Vidic or John Terry, who puts himself about, elbows and all: Fulham’s Brede Hangeland springs to mind.