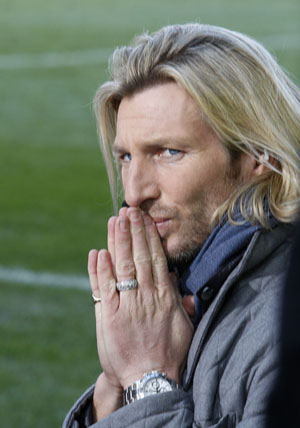 Football punditry is a cushy number indeed. Apparently, you don’t even have to know anything about the actual footballers you are talking about, particularly if they are “foreign chaps”.

From Paul Merson and the Sky Soccer Saturday crew to Match Of The Day’s Holy Trinity of Lawrenson, Hansen and Shearer, ignorance is apparently bliss. Why swot up on world football when you can swan into the studio and spew a clichéd stream of (un)consciousness?

Blonde-bonced Robbie Savage is the latest ex-pro to highlight this endemic lack of knowledge, getting into a right muddle over his German centre-halves on BBC 5Live yesterday evening. Responding to news of German giant Per Mertesacker’s cheap-as-chips move to Arsenal, the Welsh terrier questioned the quality of the Gunners’ new signing, pointing to his poor spell at Real Madrid. Except, Mertesacker hadn’t played for Los Merengues. That was Christoph Metzelder.

Admittedly the latter is also German, a centre-back and has a second name which begins with an “Me” and ends with an “er”, but is this really good enough for a professional football “expert”? The eternally modest Savage did eventually admit on Twitter that even a great man such as himself wasn’t perfect – “There you go tweeps I’m human !! Lol”, but his error had already been shovelled onto the mountainous, steaming pile of memorable punditry aberrations.

However, until prospective pundits are required to do some kind of entrance exam before embarking on a media career, expect another season of gaffes, goofs and gross embarrassment.