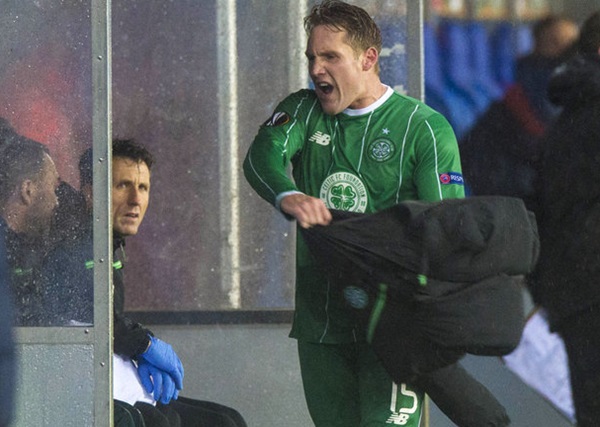 Celtic slumped to yet another miserable away defeat in the Europa League last night, going down 3-1 to Molde in Ole Gunnar Solskjaer’s first game in charge since his return to the reigning Norwegian champions.

It would appear that the mood was not great within the Celtic camp with Kris Commons, who scored the Bhoys’ sole consolation goal, throwing a massive tantrum after being subbed off by Ronny Deila after just 66 minutes.

After stomping off the pitch, Commons proceeded to chunter away at assistant manager John Collins on the Celtic bench…

Commons not a happy boy pic.twitter.com/NJH7lbUCGV

“That’s something we can’t have,” said Deila of Commons’ dissent.

“We are a team. I understand that players can be disappointed at being taken off, but to show it in that way, it’s not how we want to have it in Celtic.

“We are one team and it’s not about one player. It’s very disrespectful to everyone else. That’s unacceptable.

“He was irritated he was taken off. That’s OK, sometimes you are irritated, but you do it in a better way than he did.”

Deila also confirmed that Commons had been “spoken to” but would not be punished any further for his little display.

The result saw Molde bolster their position at the top of Group A while Celtic were left propping up the table with just two points to their name after three matches.