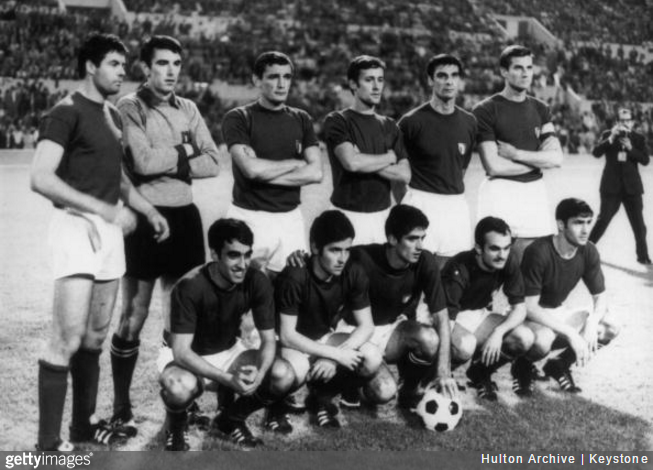 Italy pose for pictures after beating Yugoslavia 2-0 in the UEFA European Championship Final replay at the Stadio Olimpico in Rome, 10 June 1968

By the time of the 1966 tournament, 31 nations had signed up and the competition, now called the European Championship, was firmly established as the top football tournament in Europe.

There was, for the first time, a qualification group system with seeded nations, and Group 8 also functioned as a ‘British Home Championships’ – featuring England, Northern Ireland, Scotland and Wales.

As reigning World Champions at the time, England were favourites to qualify and the match-up against Scotland in London attracted a huge number of Scottish fans who swarmed in and took over Wembley in what was to become a familiar ritual in years to come.

England played their World Cup-winning side with one change, Jimmy Greaves in for Roger Hunt, while Scotland boasted Willie Wallace and Bobby Lennox in the line-up, both of whom would go on to win the European Cup with Celtic just five weeks later.

In the end, Scotland ran up a famous 3-2 victory (Denis Law is shown putting the ball past Gordon Banks below) but untimely stumbles later in the group saw England go through to the final stages as group winners.

That set up the first ever meeting between reigning World and European champions as England played Spain in Madrid in front of 120,000 at Real Madrid’s famous Bernabeu stadium.

Goals from Martin Peters and Norman Hunter saw the visitors through that second leg after Spain escaped from Wembley with a slim 1-0 first-leg advantage.

In the other quarter finals, Italy came back from a 1-0 first leg loss to Bulgaria to win 2-1 on aggregate in front of a home crowd of 84,000. Yugoslavia thrashed France 5-1, and USSR ran out 3-2 winners against Hungary after a second leg in Moscow watched by a crowd of 103,000.

The semi-finals were allocated to Italy, with the hosts drawn to play USSR in Naples, while England played Yugoslavia in Florence. Neither game was a classic, and the match between Italy and USSR was settled after extra-time by a toss of the coin that took the hosts to the final in Rome.

England went out 1-0 to Yugoslavia in a frequently brutally-contested game which saw Mullery become the first England player ever to be sent off in an international. Victory over USSR in the third-place game in front of 50,000 in Rome was scant consolation as the reigning World champs went home disappointed.

The final was played on 8 June 1968 in Rome, in front of an overwhelmingly partisan crowd. Despite this, Yugoslavia bossed proceedings but could not add to a first half goal. An Italy goal scored as a result of a controversial free-kick nine minutes from the end sent the game into extra-time and, with no further score, the final went to a replay two days later.

The Yugoslav side were completely exhausted after giving their all in the first match, and handed Italy vast swathes of space in which to operate.

The hosts eventually won 2-0, a victory which went some way towards erasing the memories of an awful World Cup showing two years previous.

However in truth, with Yugoslavia flagging so badly on the day, it proved to be an unsatisfactory ending all round.

This way for earlier instalments of the Euro Story…

In The Beginning There Was The 1960 European Nations Cup
England Humiliated, USSR Beaten And Spain Triumph In 1964