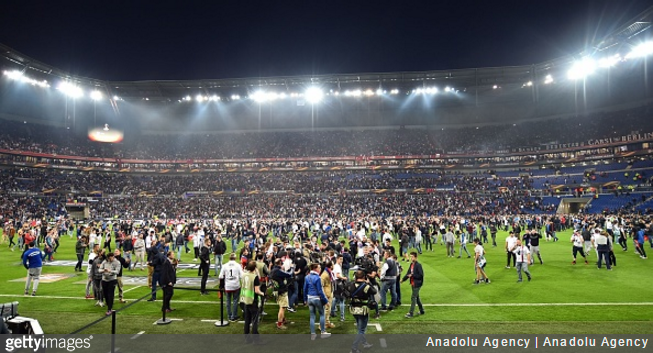 Kick-off of Thursday night’s Europa League quarter-final between Lyon and Besiktas had to be delayed by 45 minutes after crowd trouble marred the opening to proceedings.

Police were deployed as pockets of violence were reported outside the Parc OL and the trouble was limited to the concourse, as fans brawled in the tribune behind the goal as the players warmed up.

Indeed, hundreds of Lyon fans were forced to spill over the advertising hoardings and take refuge on the pitch after “projectiles and fireworks” began raining down from the upper tiers.

As the stadium security attempted to diffuse the hostility, Lyon president Jean Michel Aulas ventured into the belly of the beast in an attempt to help quell the unrest and broker the peace…

Eventually the match went ahead, but not before the players and match officials re-jigged the standard UEFA pre-match niceties in an attempt to foster an atmosphere of unison.

Indeed, the two teams lined up around the centre circle and spent a few minutes applauding the entire crowd…

Mercifully, the only drama thereafter came on the pitch itself, as Lyon scored twice in the closing 10 minutes to snatch a 2-1 win.

The second leg is scheduled to take place in Istanbul next Thursday.